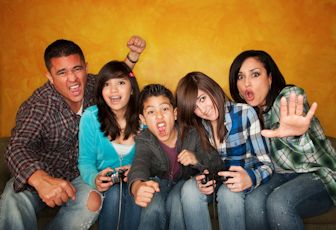 Deut 7:26 gives us a stern warning about the material we bring into our homes. As you can imagine, this includes video games and other media. Many people disregard the warnings in the Holy Bible, but the guidelines listed within it are for our own good and we need to pay close attention.

Now, let me start out by saying I’m a gamer. In fact, I used to be a hardcore gamer and game trader. Throughout the years I have accumulated an amazing total of 535 games on my Steam account. I used to get games for pennies on the dollar by flipping them repeatedly until the cost was practically nothing. Unfortunately, this was an addiction and I always wanted more games. I actually ended up spending more time trading then I did gaming. This is one area to be careful of when getting too hardcore into gaming. I have a lot of friends who are still hardcore into this way of life, and they can’t see the way out. I had to have God rescue me from this path or I would still be a hardcore trader.

Another thing to consider is time investment. Friends, teens, don’t spend all day playing video games, especially at the expense of your spiritual life. Make sure you’re taking time out for devotions, fellowship with others, and prayer.

Now to get you on the right track, I’m going to make some recommendations of some safe games I enjoy. Also, if you’re interested in good deals, I would suggest checking out Cheap Shark to find the best prices for digital games on the Internet. Here are my recommendations for the platforms I use:

Friends, these are just a handful of suggestions, but everyone has their own tastes. Just be careful with the choices you make and how much time you spend on gaming. Try not to let video games interfere with your spiritual life. If they start to bog you down spiritually, then it’s time to take a break. Thank you for reading and God bless.

Joel M. Bauer is a 45-year-old U.S. Army Veteran from Dunn, NC, which is just outside of Raleigh. After being honorably discharged from the U.S. Army, he attended school at Taylor University, a Christian liberal arts school, in Fort Wayne, IN, where he received his BS in social work and psychology. He has worked in such places as a homeless shelter, a community based treatment center for severe mental illnesses, a school for troubled students, and other social service agencies. His current endeavor is to build The Bottom Line website into a site that inspires both Christians and non-Christians alike, and brings glory to God.
Previous Our Hope: Where Does My Help Come From?
Next A Letter for My Courageous Son, Nathaniel