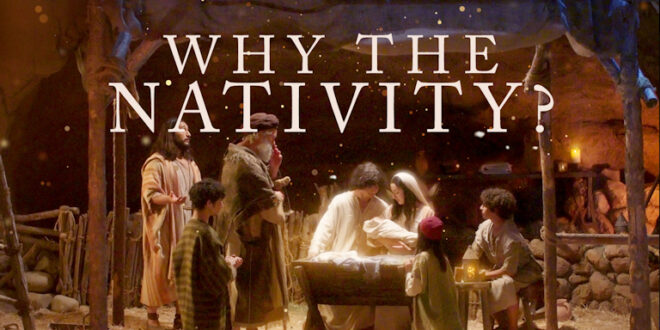 As Christmas approaches more and more nativity scenes will be on display. Will people see nothing more than a baby in a manger? Will they stop to ask if there is some meaning and purpose behind it? Some have even banned it. Many have never heard the biblical account of Christmas.

A docudrama is coming entitled, “Why The Nativity?” It is produced by Turning Point for God Ministries in San Diego, California, led by its founder and president, Dr. David Jeremiah. The movie is based on Jeremiah’s book by the same name. This ministry took on a huge production to proclaim the story of Christmas as recorded in Matthew 1:20-21. An angel appeared to Joseph in a dream and said, “Do not fear to take Mary as your wife, for that which is conceived in her is from the Holy Spirit. She will bear a son, and you shall call his name Jesus, for he shall save his people from their sins.”

The movie is the largest production in San Diego County, since “Titanic.” It was filmed in ten locations in Southern California. A set was built on a farm in Lakeside, a rural community east of San Diego and near the Turning Point headquarters. This site was chosen because the terrain resembles that surrounding the real Bethlehem.  It took 18 months to build the Bethlehem and Nazareth sets.

All total there are over 640 people in the cast and crew. Paul Joiner, a Turning Point staff member, is the creative director, and wrote the screenplay. There are more than 40 animals in the film, including 30 sheep that are originally from Bethlehem.

“Why The Nativity?” can be viewed on davidjeremiah.org on Thanksgiving Day as well as on all regularly scheduled Turning Point programming. It will also be aired on television December 4th. Look for it on A&E, TBN, Lifetime, Daystar, and The History Channel. Local churches can have community viewings as a means of introducing people to the gospel message via the true biblical and historical account shown in this docudrama. It will answer the questions surrounding the nativity. You will no longer simply see a baby in a manger. You could come to have a personal relationship with the Savior who offers peace, hope, and eternal life.

John Livingston Clark is 67 years of age and lives in central Washington State. He has written two published books, and two published poems. His initial book is called, " God's Healing Hope: Breaking the Strongholds of Wrong Thinking." His second book, released in December of 2016, is a motivational book written to seniors titled, " Seniors: Are You Retiring or Recharging?" Both books are available on amazon. You can also view his writings on www.faithwriters.com. John is available to speak on a variety of topics. Visit me at jclarkministries.com
Previous Jerusalem and the Temple
Next The Savior From Bethlehem