Breaking News
Home / Faith / That’s Who He Is 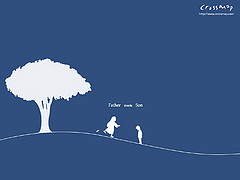 That’s Who He Is

We’re probably familiar with increased fitness programs and gym enrollments after the holidays. Numerous folks begin exercise routines, running, or cycling. Dietitians claim running helps with weight loss, cardiovascular health, and an improved emotional state or ‘runner’s high’. Conversely, there are large numbers of individuals who don’t like to run. I’ve heard it said that dignified people don’t run. Considering it disgraceful, especially in Middle Eastern culture, elderly men won’t rush around or frantically hurry about. In theory, it sounds right but hold that thought.

For instance, in Luke’s gospel we find a father who runs. From my understanding of scriptures, this is the only time Father God is pictured as running. Goes something like this. In a familiar parable called The Prodigal Son, we almost lament with the heartbroken father whose son leaves home in an untimely manner. Gathering early retirement funds, the younger of his two sons journeyed to a far country, choosing a life of sinful self-indulgence. After finding himself depleted of all resources, he spiraled downward to the worst degradation of all—living with swine, and desiring to eat their slop.

Back home, the father waited intently; eagerly looking for his son’s return day after lonely day. If you will, picture in your mind’s eye the father’s continuous watching over the horizon for a glimpse of his precious child. Then suddenly, one glorious morning he sees his dear son a great way off and starts leaping, racing wildly toward him. He embraces and kisses him passionately; overwhelmed with extravagant joy “But while he was still a long way off, his father saw him and was moved with pity and tenderness [for him]; and he ran and embraced him and kissed him [fervently]” (Luke 15:20 Amp).

In your mind’s eye, you pictured the father running. And why not? It was one of the happiest days of his life! He didn’t care if running was disgraceful or if the household servants were deriding and mocking behind his back. He only wanted to hold and love-on his darling child as quickly as possible. Absolutely nothing can stifle Father God’s love for his children and many waters cannot quench love (Song of Solomon 8:7).

Come to think of it, maybe we’re like the prodigal son; unworthy, but desperately needing unconditional love. Satisfying love is found in God alone. He loves tenderly with reckless, outrageous, and relentless adoration. We cannot exhaust His mercy and patience as He searches for our return. Love never fails and Calvary’s cross proves His grace toward a lost and dying world. Visionally speaking, can you see His extended arms? Do you see Jesus running toward us, meeting us where we hide? Yes, He waits. He loves. God is Love. That’s who He is and He can’t help it (1 John 4:16-19).