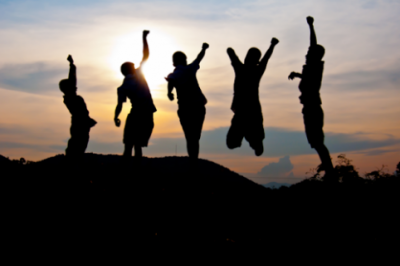 This past weekend we celebrated the death and resurrection of Jesus. It is always a good reminder of the sacrifice that He made for us that we might be saved, restored to the Father, and inherit eternal life. This year, I was drawn to the theme of victory over death.

After the crucifixion, it appeared that the devil and death were victorious over Jesus. But He emerged from the tomb in glory and power, holding the keys of hell and death. Because of this, our salvation ultimately includes victory over death as well. Death will not have the final word for those who are in Christ!

What does this victory over death include?

Before coming to Christ, we are spiritually dead. We are disconnected from God, who is the source of life, because of our sins. But when we repent and trust in Jesus for our salvation, our spirit is raised from the dead and we are vitally connected to God. The penalty of sin—which is death—is lifted off of our shoulders and we receive eternal life.

2. Release from the fear of death

“…that through death He might destroy him who had the power of death, that is, the devil, and release those who through fear of death were all their lifetime subject to bondage.”
-Hebrews 2:14-15

Since Jesus was victorious over death, we do not need to be afraid of dying. Our life and future is in God’s hands and we can trust Him with our destiny. For believers, death is simply a transition into eternal life. Though there is temptation to fear, we can rest in what Christ has done and face both life and death with confidence and courage.

3. The promise of a resurrected body

So when this corruptible has put on incorruption, and this mortal has put on immortality, then shall be brought to pass the saying that is written: “Death is swallowed up in victory.”

Jesus’ death and resurrection is called the “firstfruits” of those who will be resurrected with a new incorruptible body. (See 1 Corinthians 15:20-26 for more on this). We will live forever in a new body that can never corrode or weaken. This is an incredible promise for us to look forward to.

Though death is a reality in this fallen world, in the end, death is “swallowed up in victory.” Because we are in Christ, death has lost its sting!

Jake Kail is a teacher, author, and speaker who is passionate for the kingdom of God. He was called into ministry during his college years, after a life-changing encounter with God. The focus of his ministry is on teaching and equipping believers, strengthening local churches, and seeing awakening and restoration come to the church. He also ministers often in the area of deliverance from evil spirits, seeing people set free from bondage, torment, and oppression. Jake is the author of three books: Restoring the Ministry of Jesus, Can a Christian Have a Demon?, and Abiding in the Vine. He speaks at churches, retreats, conferences, and other venues. Jake lives with his wife and family in Lancaster, PA where he serves on the pastoral team at Threshold Church. Check out Jake’s website and blog here: http://www.jakekail.com.
Previous The Truth about Abortion
Next The Rapping Priest