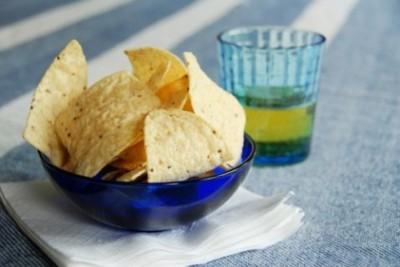 Louder and louder the cries and screams of my two-year old’s rebellion came. This time the noon showdown was over a cracker, a tortilla chip, and my firm persistence.

“Son, eat your cracker first, then you may have a tortilla chip.” A glare that could knock any mamma dead and a pointed finger demanded his request.
“Want chip!”

“Son, eat your cracker first.” My eyes narrowed in coupling his glare.

“No!!” His shriek filled the air as the stare down continued. “Chip!”

With a calm and collected voice, I replied, “Eat your cracker.”

“No!!” More hysterics and dreaded stares.

“I said, eat your cracker first.” I could hear the Western music increasing its intensity as he prepared to send out his next cry of rebellion.

With sudden surprise, he grasped hold of his cracker…munch, crunch, and with a chowed down cracker he forfeited the match, and Jekyll transformed back into Mr. Hyde right before my eyes.

“Thank you for obeying what I asked you to do. Here is your chip.”

I wish I could say that every showdown ends in just a few rounds, but that is not usually the case.

Honestly, I did not expect a progression of will power to increase with each child, but it has, and my youngest son has won the prize for being the strongest willed child of the four.

Tackling issues with persistence is the key to raising kids. Not only do you have to be persistent, but you also must be consistent. You must follow through with your word.

Imagine if Jesus had wavered in any part of his ministry here on earth. Would evil spirits have been cast out, dead people raised, or blind people given sight? Here’s an even more devastating thought, what if he had not followed through on his promise to his father? Even up until the end, he had doubts about his commitment,

Parenting is no easy endeavor and it takes a multitude of courage to stay unwavering in your decision especially as children grow into their teenage years. However, our job in raising kids is to be a parent to them. Teach them to understand what it means to make a commitment and follow through. By establishing a good and strong example, you are setting them up for success in life.

“Start children off on the way they should go, and even when they are old they will not turn from it.” (Proverbs 22:6)

is an author and editor for The Bottom Line Ministries as well as a member of Faith Writers. Currently she teaches high school language arts. She is a mom to four amazing blessings and enjoys every moment life has to offer. Renee has a fervor and drive to learn, she loves to read and spend time with her family, and is involved with her local church ministries. Humbled by God’s gift of words, she has a passion to write what the Holy Spirit has placed in her heart. She hopes to publish her in-progress book someday, but in the meantime, is honored to be placed as part of the TBL writing family and is holding on to the ride wherever God is leading. Renee and her family reside in their country home in Holland, Iowa.
Previous Resolutions for the New Year: Facts and Fiction
Next Saving Lives Is Jesus’ Forte