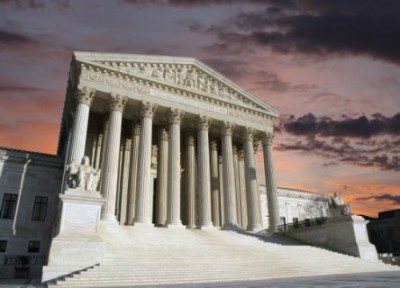 Deuteronomy 16:18-19 (NLT) 18) “Appoint judges and officials for yourselves from each of your tribes in all the towns the Lord your God is giving you. They must judge the people fairly. 19) You must never twist justice or show partiality. Never accept a bribe, for bribes blind the eyes of the wise and corrupt the decisions of the godly.

It seems these days that crying discrimination, oppression, and victimization has become a national past-time. Frankly, it is getting very tiresome. People feel empowered when they are fighting against injustice whether it is real or perceived. It is society that becomes the victim as the drumbeat of this claim is perpetuated.

This week the Supreme Court ruled that it is unconstitutional to force care-givers who receive compensation to stay home and care for a disabled family member, to pay union dues. This was a unanimous decision. It was fair. And most importantly, it was Constitutional.

The court also ruled a Massachusetts law barring protests outside abortion clinics unconstitutional. The law was imposed in response to violence at some clinics. The law, in spite of how well intended it may have been, infringes on our protected right of free speech and our right to assemble peaceably. This decision was unanimous. It was fair and, again, most importantly it was Constitutional.

Our protection from unreasonable search and seizure was confirmed in the court’s unanimous ruling that a warrant must be issued before law enforcement officials can lawfully examine the contents of our cell phones. All three of these rulings brought before our highest court were found to be Constitutional …unanimously. Could it be that the ideological divide is not as deep as it has appeared to be in recent years?

The ‘Hobby Lobby’ case, perhaps the most publicized, did not result in a unanimous decision. The court ruled 5-4 to uphold the business owner’s constitutionally protected right of religious freedom. In this case, the court was divided along social, ideological philosophies. This is a disappointment. It appeared that the previous decisions were an indication that the justices were keeping politics out of the courts. Sadly, this was not to be the case. Nevertheless, the majority opinion ruled that employers are people. Therefore, they have religious freedom and that the government cannot force them to violate their deeply held convictions in order to fund the perceived ‘rights’ of their employees. It is a great victory for religious freedom in America.

Everyone should be celebrating our freedom! Yet those in opposition are declaring that women’s ‘rights’ are being taken away and that they will no longer have access to reproductive health-care. This is not an innocent misunderstanding. This is not simply political spin. It is an outright lie. The freedoms guaranteed in the Constitution have been preserved. Yet, once again, some are arguing that we are suffering oppression. Life, liberty, and the pursuit of happiness; the freedom to speak (express ourselves) and assemble, to choose for ourselves our religious practice, how we will worship (or not worship) and we cannot be prohibited from doing so.

Nowhere, within our historic documents, does it guarantee one can be compelled to pay for the food, housing, personal choices, or any other ‘need.’ Compelling one person to buy, or do, anything for someone else just because the individual believes it is her ‘right,’ is the exact opposite of freedom. It is contrary to everything brave men and women have given their lives fighting to preserve. Freedom.

As Christians, we know that true freedom is only found in Jesus Christ. As Americans, we are free to choose to follow Him… or choose not to… for now. One wrong decision by the Supreme Court and we could lose the liberty we take for granted in this country. It is critical to that we continue to hold this nation up in prayer. As hearts drift further from God America will drift further away from truth and freedom.

Ephesians 4:17-19 (HSCB) 17) Therefore, I say this and testify in the Lord: You should no longer walk as the Gentiles walk, in the futility of their thoughts. 18 They are darkened in their understanding, excluded from the life of God, because of the ignorance that is in them and because of the hardness of their hearts.19) They became callous and gave themselves over to promiscuity for the practice of every kind of impurity with a desire for more and more.

Melinda is currently the worship leader at her small church in rural America. Married for 23 years, she and her husband Larry have one son. She is the Director of Mailing in the print/mailing industry by day and freelance author by night. Her desire to write is a passion borne from tragedy. God used it to take her faith to a much deeper level. Melinda is a freelance writer and member of FaithWriters. She joined the TBL team in March 2014. Believing we are citizens of a greater ‘kingdom,’ her articles for The Bottom Line examine governmental responsibility, citizen involvement and current political topics. With the great wisdom contained in scripture as her guide, she looks at today’s political environment from a Biblical perspective. She prays her words will prompt the reader to view citizenship - and every aspect of their life, through the eyes of faith. Col 3:17 To read more of Melinda’s writings on her faith, hope, and life visit her blog Still Living Still Loving or her page at Faithwriters.com. You can also follow her on Twitter @MKZbk.
@@MKBzk
Previous End of the Law
Next 365 Reasons NOT To Fear