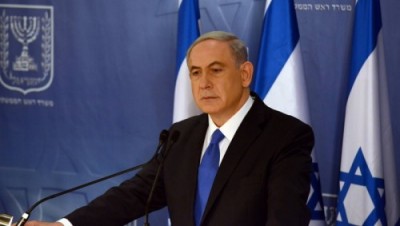 The Re-Election of Netanyahu and God’s Divine Agenda

The recent speech by Prime Minister Benjamin Netanyahu added new tension to the relations between his country and the White House. Israel National News.com has reported that President Obama wants “revenge” for the speech. Considering how well it was received by both houses of Congress, and how “frustrated” Obama has become (the word used by the above news source), that is not surprising. Instead of admitting that Israel is in a much better position politically and geographically to know what is best for the Middle East, the President has been determined to get things his way.

The failure by the White House is on three fronts. First, there was an attempt to oust Netanyahu, which obviously was unsuccessful. Second, is the Iran nuclear problem. Third, there remains questions about Israeli territories and settlements.  According to one political expert, “Obama is specifically attempting to use ‘deterioration in the Palestinian territories’ as an excuse to draw attention away from the disastrous-and unpopular-Iran nuclear deal.” Perhaps Obama would not be so disappointed if he would not insist in meddling in the affairs of other countries. He could possibly ease the tension with Netanyahu by beating him at a round of golf, something he has become very good at lately.

The problem is Obama has his own agenda, but Psalm 33:10-11 says that “The Lord nullifies the counsel of the nations; He frustrates the plans of the peoples. The counsel of the Lord stands forever, the plans of his heart from generation to generation.” Psalm 2 adds to this in verses 2 and 4: “The kings of the earth take their stand, and the rulers take counsel together against the Lord and against His anointed…He who sits in the heavens laughs, The Lord scoffs at them…” In reference to the re-election of Netanyahu is Psalm 75:7. “But God is the Judge; he puts down one and exalts another.” God has his own agenda for the nations and for rulers. He has the final say, especially when it comes to Israel, his chosen people.

Can you think of some specific ways that God’s hand has  been evident in “putting down one and exalting another, in political races? How does God show his sovereignty over the nations?

Tags Benjamin Netanyahu God will have the final say God's sovereignty over governments Iran nuclear deal Israel Israel National News.com Israeli territories and settlements Netanyahu's speech to the United States Congress President Obama Psalm 2: 2 and 4 Psalm 33:10-11 Psalm 75:7 putting down one and exalting another the counsel of the Lord White House

John Livingston Clark is 67 years of age and lives in central Washington State. He has written two published books, and two published poems. His initial book is called, " God's Healing Hope: Breaking the Strongholds of Wrong Thinking." His second book, released in December of 2016, is a motivational book written to seniors titled, " Seniors: Are You Retiring or Recharging?" Both books are available on amazon. You can also view his writings on www.faithwriters.com. John is available to speak on a variety of topics. Visit me at jclarkministries.com
Previous When Faith Feels Foolish
Next Don’t Let Satan Stop You