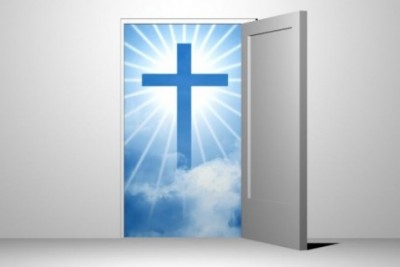 God is Knocking on America’s Door so Let Him in

Jesus stands at the gates of heaven looking at America; knocking on her door so He can come in and dine with her. Do you see Him weeping over her as He wept over Jerusalem? Longing to bring her into His bosom to cover her with His feathers and protect her from the wiles of the devil.

Here I am! I stand at the door and knock. If anyone hears my voice and opens the door, I will come in and eat with that person, and they with me.” Revelation 3:20

For the eyes of the LORD run to and fro throughout the whole earth, to give strong support to those whose heart is blameless toward Him… 2 Chronicles 16:9

I believe the Lord is standing at the door of the United States looking in to see if there is any whose hearts are blameless before Him. I’m confident He will find many from coast to coast who truly love Him in our beloved nation. I hear the Lord knocking on the door of America saying He wants to come in and dine with us again. Lately, certain parts of our great nation have closed the door on Him and shut Him out of the affairs of the United States.

David, tells us wisely in Psalm 33:12, “Blessed is the nation whose God is the LORD, the people he chose for his inheritance.” Let it be known that over 238 years ago God founded this nation as His inheritance and His hand has been on this country since its inception. The Church of Jesus Christ has the living God in her midst. We have tied His hands by not praying against the sin and moral decline that has ravaged this country over the last few decades. The church must rise up and open the door of the nation to the Lord through prayer and invite Him in to walk strongly in our midst again.

What does it mean for the Lord to walk strongly in our midst again? I’m glad you asked. It means the Holy Spirit descending on our land in power to revive the dead institutions leading our country in this hour. The American Congress and Senate need to be set on fire by God’s hand. More importantly the Church in America needs to be set on fire by Jesus. It’s never too late for this country and God hasn’t given up on the United States of America. Hope is not lost for our nation.

Recently, the Supreme Court of the United States made a very poor landmark decision: they sanctioned that same sex marriages are constitutional and should be recognized in all 50 states. Remember we are not fighting the human judges or the LBGT community, but principalities and wicked rulers in the heavenly places. God looks down from heaven at these spiritual forces who are orchestrating the Godless decisions that are being made every day in our courts and in our political systems. He will destroy these demonic forces if we wake up to the reality that the church has let Satan run rampant within our borders for too long.

“Submit yourselves, then, to God. Resist the devil, and he will flee from you.” James 4:7

The American church must, I repeat, must take a stand against the devil by resisting him at every turn by submitting to God in prayer. The devil will run from us because we have given our country over to the mighty hand of God once again. God is knocking on America’s door so let Him in!

Do you hear God knocking on America’s door? How can you help our nation to let Him in?

Greg is a born again believer who testifies to the absolute transforming power of God's word. Greg has been called to full time ministry and He has known Jesus for most of his life. Greg received his degree in Pastoral Ministries from what was formerly Bethany University in Santa Cruz,California. View Greg blogs on iwriteforjesus.com. Greg has a book published on " To Jesus Christ the High Priest of my confession: A personal Testimony." find it on http://www.amazon.com/Christ-Priest-Confession-Personal-Testimony/dp/1507706847/ His testimony in short form is published in "Trials and Triumphs II" on http://www.amazon.com/Trials-Triumphs-II-FaithWriters/dp/1498416012/. This book is filled with 50 inspirational testimonies and is a project of Faith Writers.
Previous 5 Reasons to Keep Praying
Next Are Your High Heels Hurting You?