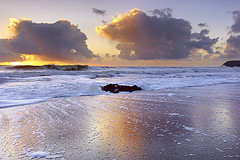 In 1800, the French Navy built a human-powered Nautilus (submarine) designed by Robert Fulton. Years later, a different submarine underwent routine testing and remained submerged twenty-four hours. Afterwards, the ship powered safely toward the harbor. An inquisitive crowd stood ashore to welcome the crew and a quick question flew from an onlooker, “How did the violent windstorm affect your experiment last night?” Looking bewildered, the commander replied, “What roaring waters? We didn’t feel the slightest tremor!” Turned out, the submarine sunk beneath the watery surface and reached the ocean’s deepest area known to sailors as “the cushion of the sea”. Although the body of salt water may be whipped into huge waves by torrential winds, the lower liquid movements remain unstirred.

Like the depths of the sea, the peace of God lies securely within our hearts and no external difficulty or disturbance will penetrate. Anyone entering the Lord’s presence partakes of this undisturbed quietness. Psalm 46 comes to mind and I’m ad-libbing: ‘though the earth be removed, though the mountains be carried into the midst of the sea; though its waters roar and are troubled, though the mountains shake with its swelling, we will not fear. God is our refuge, strength and very present help in time of trouble. He’s in our midst and we shall not be moved. He helps at the break of dawn and utters His voice making wars cease, breaks the bow, cuts the spear in two, burns the chariot. Therefore, be still and know that He is God.’

Corrie ten Boom (holocaust survivor) wrote, “He’s cast all our sins into the ocean and ‘no fishing allowed!’ Be encouraged today child of God, our transgressions, once thrown overboard, will not float to the surface. It’s finished! “As far as the east is from the west, so far has He removed our transgressions from us” (Psalm 103:12 NKJV).

“Far, far away, the roars of strife fall silent, and loving thoughts rise ever peacefully, and no storm, however fierce or violent, disturbs the soul that dwells, O Lord, in thee” ~~~Harriet Beecher Stowe