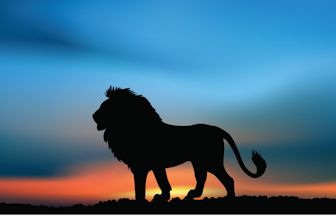 1 Peter 5:8 Be sober, be vigilant; because your adversary the devil, as a roaring lion, walketh about, seeking whom he may devour.

Satan has been prowling around for thousands of years looking for individuals he can exploit. However, Satan is nothing but a cowardly lion that uses his roar to try and intimidate us when we are not rooted spiritually. When dealt with properly, Satan quickly scurries away and becomes nothing but an afterthought.

Lets look at the story of Job. Satan goes before God and petitions to come against Job. He threw everything he could think of at Job, but Job was willing to take the bad with the good. Sure, Job lost a lot at first, but his blessings were multiplied in the end, and Satan had vanished by the end of the book. Where is this roaring lion? He is nowhere to be found!

Today, Satan is still up to his old tricks. He tries to come at us, but all we have to do is draw closer to God and this seemingly fearsome lion disappears. Lets take a look at what James has to say about this:

It’s written there as clear as a sunny day. All you have to do is submit yourself to God and resist the devil. Do that and Satan will disappear faster than a magic rabbit in a hat. You see, this adversary has been defeated. Not just defeated, but literally made a public spectacle. How embarrassing! Lets look at where it speaks about this in scripture:

There is one final key to sending this lion packing. There are three words he hates more than anything. Christ gave us these three words while he was up against the devil in the wilderness. They are, “It is written…” You see, Satan can’t argue with what is written, because scripture is “God-breathed”. He simply can’t argue with God and when we proclaim what God has said, then Satan is sent with his tail tucked.

Friends, I don’t want you to be misinformed. Satan is in fact a dangerous adversary. However, we have our Lord and Savior Jesus Christ, and by the Word of God and His Blood we can overcome any of the attacks by this cowardly lion. More importantly, let’s focus on drawing closer to God and continuing to grow spiritually. If we follow that path, we have nothing to fear, and just as Job experienced; the havoc that once existed in our lives will turn into blessings. Thank you for reading and God bless.

Joel M. Bauer is a 45-year-old U.S. Army Veteran from Dunn, NC, which is just outside of Raleigh. After being honorably discharged from the U.S. Army, he attended school at Taylor University, a Christian liberal arts school, in Fort Wayne, IN, where he received his BS in social work and psychology. He has worked in such places as a homeless shelter, a community based treatment center for severe mental illnesses, a school for troubled students, and other social service agencies. His current endeavor is to build The Bottom Line website into a site that inspires both Christians and non-Christians alike, and brings glory to God.
Previous Our Hope: Devotionals, And Why We Need Them
Next The Truth will Stick