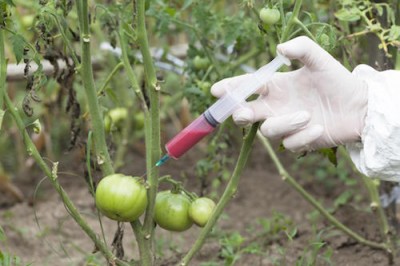 Are Genetically Modified Foods Modifying You?

Let’s face it: today’s soils and growing methods are not yielding the quality of foods we ate while visiting great grandpa’s farm–which were usually as close to how God made them as one could get.

While organic foods have earned a multitude of faithful supporters, controversy still prevails when they are compared with GM (genetically modified) foods.  Organically grown products have been tested repeatedly and shown themselves to be superior to GM products and foods grown in Round-Up ready (a herbicide whose primary ingredient is glyphosate) soils.   But, did you know that secrecy and strict controls on the “patented” seeds owned by Monsanto negatively affect a true rendering of real results?   In other words, man has taken it into his own hands to improve upon God’s time-tested way of growing and providing food for His creation and it isn’t working well for mankind, animals, or the soil.

A Danish farmer began noticing several “red flag events” occurring on his pig farm after feeding GM soy-based food.  He decided to record his observations. When he changed the animals’ GM soy-based feed to a non-GM food, he discovered the farm used two-thirds less medicine, on the whole, with medication on the weaned piglets dropping by 66 percent.  Sows produced more milk, had a longer production cycle, and more piglets were born alive.  A severe diarrhea completely disappeared from the farm.  Yet, even after this change, the farmer noted another serious problem.

A large increase in gross deformities was becoming more and more common in his piglets–which were, amazingly, born alive.  Describing the scene in detail would need a “reader beware” warning, so I will let you use your wildest imagination and you won’t be far from heartbreaking realities.  As the farmer did more research on this travesty, he found the new food was from soils and plants containing glyphosate, the main ingredient in RoundUp as I previously mentioned.  Even non-GM plants are bombarded with this chemical.  When the euthanized piglets were analyzed in a lab at Germany’s Leipzig University, significant concentrations of glyphosate appeared in the animals’ organs and tissues.  Not surprisingly, our farmer tested positive for glyphosate in his blood even though he was eating products from the local market.

So why is this story relevant?  Do you know that at least 85% of GM soybeans are grown in the United States?   Do you know that most foods on store shelves have some derivative of soy in them?  Do you know that “since their introduction in the 1990s, GM products have conquered agriculture in the US and hold a large share of the food on Americans’ plates?”  Do you know that large farmers still provide our food?  Do you know that RoundUp is touted by the powers that be as one of the best herbicides in providing weed control–especially for farmers?

All this boils down to the fact that if you don’t know the farming methods of the one who grows your food and where it comes from, you are probably providing for your family (at breakfast, lunch and dinner) foods negatively modified by herbicides.  There are a myriad of sites giving scientific and real life testimony to the true goodness of organically grown food, but it could  still be tainted by GMO pollen found in wind-drift from any nearby GMO soy or corn field.

The best you can do for your family is pray and buy organic food when possible or grow your own food.  Pray before buying.  Pray before eating.  We need God’s blessing upon every area of our lives–including our food.  We really do need to pray without ceasing!  (1 Thessalonians 5:17)

“As for me and my house, we will serve the Lord,” (Joshua 24:15) while choosing non-GM foods and buying organic whenever possible.

What additional steps can you take to ensure your family is eating safe foods?

I just love walking outdoors - day or night. I identify most with the creative side of God and am energized by His artistry all around this world. He amazes me every time I turn around! Yeah, God and thank you, Jesus.
Previous Making Room for the Holy Spirit in Your Life
Next 5 Healthy Bedtime Habits to Practice