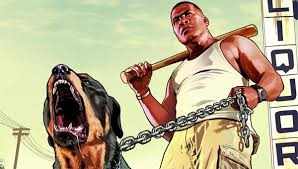 Title: “It’s fine if you trust your child, and if your child has no anger issues”

Comment: “if your kid knows the firearms safety and is not showing signs of excessive anger, this is perfectly fine. i let my 14 year old son play this. its not about killing cops its about taking cars.If you trust your kid then this title is perfectly fine. (Copied exactly from website including spelling, punctuation, etc).

Here is another comment from the website: “The violence is OK and same with the sex. Any kid over 13 can handle it. Some swearing a alcohol. Great game” (again copied exactly as it is on the website).

I am already appalled by just the reviews and I haven’t even delved into the specifics of the game, although I know some of the things it contains due to the fact that my husband’s best friend purchased the game for his 8 year old son.  Shall we dive in and see what awaits?

A particularly alarming and sobering statistic from Wikipedia places debut sales for Grand Theft Auto 5 at $800 million in the first day of sales and $1 billion in the first three days.  “[Breaking] industry sales records and [becoming] the fastest-selling entertainment product in history (emphasis mine).”  http://en.wikipedia.org/wiki/Grand_Theft_Auto_V

Here are some of the things you can do in Grand Theft Auto 5 for the uninitiated.  You can torture your victims by pulling out teeth and electrocution (among others), steal cars (hence Grand Theft Auto), kill policemen, buy a prostitute, and then kill her.  You can steal a bus and drive it off a cliff, kick a dog to death being walked by its owner, and commit mass murder by crashing a plane into a building (sound familiar?).

And if that is not enough, there is the character with the never ending penis jokes.  Characters can visit strip clubs with scantily clad women and get a lap dance.  The three main characters are a bank robber, a gang banger and a meth cooker.  All partake in alcohol and drugs.  One character has children who are addicted.  The most shocking thing, to me, is the number of parents saying that it’s not so bad, it’s fine for 13 or 14 year olds, that they hear profanity at school and the violence is nothing more than can be found on the evening news.  Interspersed in these comments are things like “a mature child should be just fine playing it as long as they are not psycho,” “if your kid knows firearm safety and is not showing signs of excessive anger,” and my favorite, “suitable for sane children.”  https://www.commonsensemedia.org/game-reviews/grand-theft-auto-v/user-reviews/adult

It is true that every parent must choose for his or her child what is permissible, but the attitude that this is a harmless game is, at the least poor judgment, and it could be something that will come back to haunt you.

I think because this is “only a game” and “everyone’s playing it” parents think it is safe.  But it is in no way as innocuous as people think.  Parents who approve of this game are allowing their child to steal, run from and kill police officers, hire prostitutes, do drugs, and go to strip clubs in a virtual world.  History has shown over and over that violent and sexual entertainment is dangerous and harmful to a child, pushing some over the edge of reality into a fantasy world where the unthinkable can be done with little consciousness of reality, and the consequences cannot be stopped by turning off the TV when it gets too deep.

Parents are not friends, and no matter how much begging and pleading, threatening and tantrums are involved parents need to stand their ground.  Parents are the guardians of their children’s minds and lives.  Step up to the challenge and stand firm.  Children’s innocence, and even their very lives, can be on the line.

Previous A Tale of Three Dogs
Next Appreciating the Shepherd