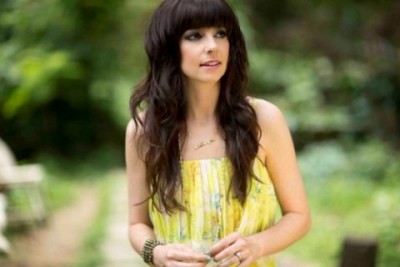 The Bible: Son of God tour will begin in Lake Forest, California, on March 20, and will be held in 16 cities through April 12. It is a promotional for ”Son of God” and will include music from both the movie and “The Bible,” which aired on the history channel last year. One of the featured vocalists will be Meredith Andrews.

Meredith Andrews, a native of Wilson, North Carolina, and winner of two dove awards, was singing in church at age 6, and was composing and leading worship songs while still in high school. She grew up in a family that provided a home for foster children and majored in family and child development at Liberty University. Her sights were set on working in an orphanage until that all changed one day, in her sophomore year, while attending a chapel service at Liberty.

As hands were raised and hearts were poured out in worship, a spark ignited within Meredith’s being that said, “This is it. This is it. This is what I have been called to do.” She currently is the worship leader at the 12,000 member Harvest Bible Chapel in Chicago. Her first album, The Invitation, was produced in 2008. In addition to her music ministry Meredith is a speaker at girls’ conferences.

When Meredith first started recording she did not want songs “to just fill a record.” Her music shares her story and life experiences. The song, “What It Means To Love,” was inspired by a little boy named McKinsley who she met while doing missions work in Haiti, right before the earthquake. She believes a person’s life story is not so much about a pursuit of God, but more about God’s pursuit of them.

The secret of success for Meredith Andrews seems to be simply doing what she loves to do with God’s purpose in mind. God has a way of opening up unexpected avenues for this to happen. This is what He did for her. God is going to use her voice and life experiences to help other people.

John Livingston Clark is 67 years of age and lives in central Washington State. He has written two published books, and two published poems. His initial book is called, " God's Healing Hope: Breaking the Strongholds of Wrong Thinking." His second book, released in December of 2016, is a motivational book written to seniors titled, " Seniors: Are You Retiring or Recharging?" Both books are available on amazon. You can also view his writings on www.faithwriters.com. John is available to speak on a variety of topics. Visit me at jclarkministries.com
Previous Meet this Inspirational Tennis Ace
Next No Time For You!