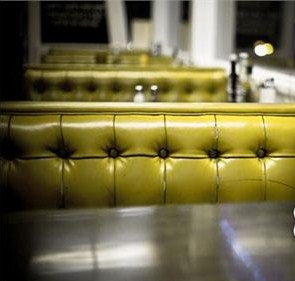 “Let’s ask God for a word for our waiter.” We were at a restaurant in Florida and didn’t know a soul in town. All we knew of our server was that he was from Morocco. When we prayed, I sensed The Lord say that his father was in need of physical healing.

I wondered, Should I say something? Let it go? If I heard wrong, I’ll look foolish.

When our waiter finally brought the check, I decided to go for it. I asked him if his parents were here in the States.

“They’re in Morocco,” he told me. (That established that they were both living).

“We were just saying grace and asked The Lord for a blessing for you,” I told him. “And I sensed God say that your father was in need of physical healing.”

He stared at me. “My father just had quadruple bypass surgery,” he said..

“It must be tough to be far away from him,” I replied.

He nodded. “But how did you know this?” he asked, gesturing in surprise.

I explained again how we’d prayed and asked The Lord for a blessing for him, and God impressed us with that need. Then I told him that we’d remember his father in prayer for a full recovery. He looked amazed, and when we got up to leave, he said “God bless you.”

Paul says in 1 Corinthians 14:25 that when prophesying to an unbeliever, “The secrets of his heart are disclosed; and so he will fall on his face and worship God, declaring that God is certainly among you.” The Lord will reveal things that only He could know, and in doing so, open a channel directly to the person’s heart.

God has shown this to be an effective tool for advancing His kingdom in the marketplace. Time after time He’s disclosed a secret about a stranger when I’ve asked Him, and every time, the word’s been well received. Sometimes, servers have broken down and wept; others acknowledged that they knew God was watching out for them.

Here are a few general guidelines to keep in mind when ministering this way:

Respect their time. If someone’s on duty be considerate of that. Being humble is the hallmark of the Spirit of God. You can write down the word and leave it for them if they indicate they’re busy.
Be gentle, be positive. Deliver the word in a spirit of meekness (Eph. 4:2). Prophecy is for encouragement, edification, and exhortation. If what you thought you heard for someone was condemning or out of line with scripture, scrap it.
Tip servers generously. Failing to bless someone practically and materially and then expecting them to embrace a spiritual blessing doesn’t work well (see James 2:15-16, 1 John 3:18)

What’s amazing about these “heart secrets” that the Holy Spirit discloses is the kindness of God. What He’s revealing to these people – Christians, Muslims, agnostics, etc. – is that what they care about is on His mind. He’s aware of their pain. His eye is on them. He wants to bring healing, reconciliation, and truth. What a God we serve Who deals in such a way with those whose hearts might be far from Him!

And He asks us His people to partner with Him in bringing the kingdom of heaven to earth – what an adventure!

Emily Tomko's radical encounter with the Lord while at a nightclub changed her life forever and inspired her first novel, College Bound: A Pursuit of Freedom. She is the author of seven books, including 31 Thoughts on Prophecy and Leaving the Shallows: igniting the faith that overcomes the world. Her tastes tend toward vintage and she's a Germanophile, having spent a year in Bremen and Nuremberg. Emily loves the scriptures and writes with fierce compassion and a deep desire to see people freed from the miry clay of this world and walking in the truth.
Previous Hope of Peace
Next It’s Time to Prepare for Your 2015 Resolution List