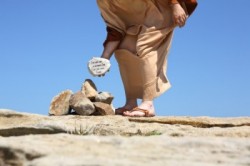 On or about A.D. 33, in Palestine, a new rabbi arrived on the scene. Word on the street rapidly spread that He was a friend of sinners. The religious community expressed outrage over this, and accused Him of seeking companionship with lowlifes. In other words, they were ashamed of Jesus’ behavior. Yet, the powers-that-be spoke truthfully. Jesus did befriend outcasts. In fact, His day-planner appointments overflowed. Mainly, society’s rejects: lame, lepers, blind, demon-possessed, Samaritans, etc.

“How is it that He eats and drinks with tax collectors and sinners?”(Mark 2:16a, NKJV) Look with me please, at the account of a sinful woman who received mercy instead of death.

When caught in the very act of adultery, several religious leaders in Jerusalem accosted her. As they dragged her nearer the temple, a small mob gathered. Hatefully parading her through the crowd, they approached Jesus, demanding, “Teacher, this woman was caught sleeping with a man who isn’t her husband. The Law of Moses declares that a woman like this should be stoned to death! What do you say?” (John 8:4-5 CEV)

Needless to say, her life hung in the balance, and hinged on Jesus’ reply. Instead of verbally answering the angry accusers, Jesus wrote something in the sand. Amid confusion, tension mounting and the woman’s utter helplessness, Jesus stood and said, “Let the one among you who has never sinned throw the first stone at her.” (John 8:7 Phillips)

Jesus is the only person who has never sinned. He certainly qualified that day for casting the first stone. But, would He? No. Mercy triumphs judgment (James 2:13), and He desires compassion toward the forlorn. Jesus didn’t want to see her punished to death. Therefore, rather than condemnation, He granted forgiveness for transgressions, pardon, and a fresh start. Count on it—the worst and vilest offender can never exhaust the depths of His loving grace.

Lesson: all we like sheep have gone astray, but there’s One closer than a brother.

“For all have sinned and fall short of the glory of God.” (Romans 3:23 NKJV)
“I did not come to call the righteous, but sinners, to repentance.” (Mark 2:17NKJV)

Nailing it down, our ever-present Advocate loves everyone in the same manner as He did the immoral woman. Remember, He died for the whole world, not willing that any should perish. We are but dust with feet of clay, desperately needing a Sin-Bearer (Isa 53). Once again, nothing we’ve done or do is beyond God’s ability to forgive.

What do you think? How could Jesus’ friendship change your life?