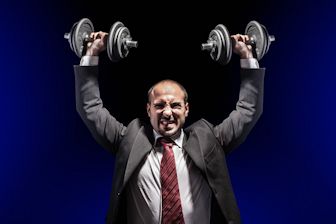 And his name spread far abroad; for he was marvellously helped, till he was strong.  But when he was strong, his heart was lifted up to his destruction: for he transgressed against the Lord his God. . . (II Chronicles 26:15b-16a)

Uzziah was a good king, and at the beginning of his reign, he did that which was right in the eyes of the Lord.  He did the right things, consulted the right people and acted with the right attitude.  And because of this, God allowed him to prosper.  The king grew strong and wealthy, powerful and famous.  And at that point, he grew a big head.  In his new state of prosperity, Uzziah looked around and thought, “Wow, look at what I’ve accomplished!  I’ve built great cities and powerful armies.  I’ve destroyed formidable enemies and aided those who could not help themselves.  Now, look at me.  I have more money than I know what to do with.  Everyone knows me and wants to be my friend.  Yes, I’ve done some great things, and I deserve everything I’ve received for all my hard work.”

Only it wasn’t Uzziah’s hard work that had caused him to prosper.  Verse 15 plainly tells us that he was “marvellously helped.”  God was rewarding Uzziah for his faithfulness, but in return, Uzziah grew proud and began to do what he wanted when he wanted, regardless what the Lord had to say about it.  His strength led to his destruction, and if we’re not careful, our strength will do the same.

How many times have we pleaded with God to make us stronger?  We want to be able to bear the heavy loads we must carry around each and every day.  We desire the strength to face adversity with a smile on our face and a song on our lips.  We think that the only way we can make it through this life is to pull ourselves up by our bootstraps and make the most of what we have.  But that’s not what the Bible teaches.  In fact, the Bible teaches the exact opposite.  According to the apostle Paul, it is in our weakness that we are made strong–not by our own strength, mind you, but by the strength of the Lord. (II Corinthians 12:10)  The apostle reminds us that we can do all things (Philippians 4:13), but the verse doesn’t end there.  We can do all things how?  Through Christ which gives us strength.

On his own, Uzziah could do nothing, but he lost sight of that.  When times were hard, it was easy for Him to lean on the Lord, but once he gained everything his heart desired, he dropped the Lord like a hot potato.  We should be careful not to do the same.  No matter what we accomplish in this life, it is all by the grace and strength of God, for without Him, we can’t do anything. (John 15:5)  In the bad times and the good, we need the Lord.  He alone can allow us to prosper, for we are only strong in the strength of Someone else.

Dana is a full-time Christian author and speaker residing in Greenville, SC with her husband and two dogs. In fulfilling her call to evangelize the lost and edify the saints, Dana spends her days writing devotions, devotional books and books for children, as well as recording podcasts on various Biblical topics. She serves in many capacities at her local church, including the roles of church pianist and ladies' Sunday School teacher. Dana has a passion for souls and longs to be used of God in whatever way He deems necessary. When not writing or serving at church, Dana can most likely be found reading or hiking a nearby trail.
Previous I’m Grown!
Next Faith and the Family – The Unbelieving Spouse