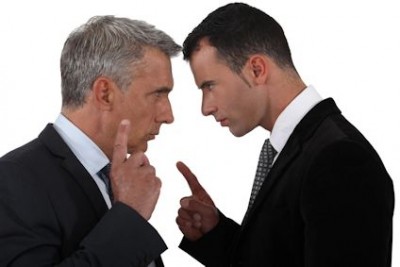 A friend of mine recently told me that she doesn’t like this website because it is controversial. What immediately came to mind is that there are too many Christians sitting in churches expecting everyone else to think and act like they do. I did not ask her whether she was referring to theological content or social issues. But either way, are Christians supposed to shy away from controversy?

A refusal to talk about controversial issues is one of the reasons why we have a rift between Christians and non-believers, is it not? Each is in their separate little world with no interaction. Could it be that Christians have overreacted to the biblical teaching of not being “of the world” to the point that they are not even “in the world?” There must be interaction with non-believers if souls are to be saved. With interaction comes dialogue between two people who do not think alike.

Jesus Himself was a controversial figure. He ate with “sinners,” and we all fall into that category. He caused trouble when he tossed over the tables in the Temple. Jesus was a radical by comparison to organized and traditional religion. At times he was not even “nice,” calling people things like “blind leaders of the blind,” and making other comments that incited ire, especially among the religious establishment. Some of the things that Jesus said would today be considered politically incorrect and intolerant.

Controversy can be a springboard for constructive discussion leading to greater understanding or an excuse for not talking at all. Is it better to be controversial or complacent? The one who is generating dialogue is at least getting the other person to think about himself, others, and social issues. Not being politically or socially involved maybe has led to the present attempt to silence Christians and religious persecution because the non-believers take this to mean that we are shunning them instead of trying to understand them. For too long there has existed this mindset that says, “You stay in your little corner and I in mine; you believe how you choose to believe, and I will do the same, and we just won’t talk about things.” While it is true that many biblical doctrines and one’s stance on social issues are not open to debate, it does not mean that there should be no conversation at all. There can be greater understanding of why Christian believe the way we do, and what kind of perceptions non-believers have of Christianity that makes them not want to accept Christ.

Are some Christians afraid that controversy will lead to compromise? If they are, they are not strong in their faith and will be “tossed to and fro, and carried about by every wind of doctrine”(Ephesians 4:14). Controversy can attract people to hearing the good news of grace and hope made possible by Jesus Christ.

At the Bottom Line, Ministries, we have a huge variety of writers from all across the United States, writing on very diverse issues and topics. In all of this, however, is one major objective: to share God’s love and grace with a needy and hurting world. The website has a Statement of Faith, which is right in line with basic Christian teaching, but even I don’t always agree with things expressed by other writers. Does that mean I am going to stop writing for this website? Of course not. God has given me a gift to be used for His glory. Someone once said that there is teaching and there is preaching. The difference between the two is that teaching is comforting the disturbed, and preaching is disturbing the comfortable. Here at the Bottom Line we probably do both. We try to write articles that will generate dialogue. Maybe some people view as controversial anything that takes them out of their comfort zone!

Are you engaging in controversy or remaining complacent and silent? Are you interacting with, or separating from, those who do not think like you? God can use controversy as a vehicle to share the truth of the Gospel. Isaiah 1:18 says, “Come now, and let us reason together…Though your sins are as scarlet, they shall be as white as snow.; though they be red like crimson, they shall be as wool.”

"in the world but not of the world" being politically incorrect Christians sitting in church pews comfort zones comforting the disturbed controversial issues developing greater understanding dialogue and controversy discussing the gay agenda disturbing the comfortable Ephesians 4:14 interacting with others people who don't think like you pro-life versus abortion tossed about with every wind of doctrine 2015-11-06
John Clark

Tags "in the world but not of the world" being politically incorrect Christians sitting in church pews comfort zones comforting the disturbed controversial issues developing greater understanding dialogue and controversy discussing the gay agenda disturbing the comfortable Ephesians 4:14 interacting with others people who don't think like you pro-life versus abortion tossed about with every wind of doctrine

John Livingston Clark is 67 years of age and lives in central Washington State. He has written two published books, and two published poems. His initial book is called, " God's Healing Hope: Breaking the Strongholds of Wrong Thinking." His second book, released in December of 2016, is a motivational book written to seniors titled, " Seniors: Are You Retiring or Recharging?" Both books are available on amazon. You can also view his writings on www.faithwriters.com. John is available to speak on a variety of topics. Visit me at jclarkministries.com
Previous I Asked And God Answered, He Is Faithful In All Things
Next Our Hope: Evaluating Our Relationships