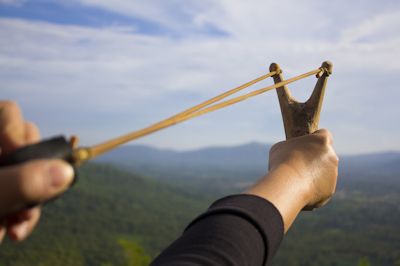 1 Sam 17:47 And all this assembly shall know that the LORD saveth not with sword and spear: for the battle is the LORD’S, and he will give you into our hands.

Everybody faces at least one giant at some point in their life. Whether it be a financial woe or a bully we must face head on, there is a battle that must take place. David knew this very well, but he also knew that whether he was in a pasture tending sheep or on a battlefield facing an angry, bloodthirsty giant, he was not alone and the battle was already won.

Lets take a moment to look at one of David’s most famous conflicts. It’s the story of David versus Goliath. So who was Goliath? Goliath was a Philistine from Gath. He was six cubits in height, he wore six unique pieces of armor, and his spear weighed six-hundred shekels of iron. He was a bully and a troublemaker, and would taunt the armies of Israel defying everything they stood for.

At the time, David was a young boy of humble heart. He knew that Goliath was nothing more than giant target full of hot air. He went to Saul, who was king at the time, and said he wasn’t about to take anymore of Goliath’s ridiculous banter, and that he would go out on the battlefield and settle this. Saul knew that David was the one to handle this task, but none of the king’s armor was appropriate for David. So David went out on to the battlefield in shepherd’s clothes, barring only a staff, a slingshot and a few smooth stones as weapons.

As soon as David entered the battleground, Goliath instantly engaged him with curses by his gods and threats to feed his flesh to the fowls of the air, and to the beasts of the field.

Of course it was David’s turn to reply and this was the beginning of the end of Goliath. Let me give it to you just as it is written in the Holy Bible:

1 Sam 17:45-47 Then said David to the Philistine, Thou comest to me with a sword, and with a spear, and with a shield: but I come to thee in the name of the LORD of hosts, the God of the armies of Israel, whom thou hast defied. This day will the LORD deliver thee into mine hand; and I will smite thee, and take thine head from thee; and I will give the carcases of the host of the Philistines this day unto the fowls of the air, and to the wild beasts of the earth; that all the earth may know that there is a God in Israel. And all this assembly shall know that the LORD saveth not with sword and spear: for the battle is the LORD’S, and he will give you into our hands.

Did you catch the five words in this scripture that ended the battle? That’s right! “The battle is the Lord’s.” As soon as David spoke those words, Goliath was in deep trouble, because the battle could not be lost as it belonged to the King of Kings and Lord of Lords. We all know what happens next. David pulls out a stone, puts it in the sling, and nails Goliath right in the forehead, killing him. David then goes to Goliath’s body, takes the sword of Goliath, and then cuts off the Philistine’s head. The armies of Israel instantly recover from their fear and chase down the now terrified Philistine army, wounding, killing, and even spoiling their tents.

Friends, you know those battles we all have? Well lets just give them all to the Lord. Lets give our battles to the Lord just like David gave his battle with Goliath to the Lord. When something becomes the Lord’s battle, it becomes impossible to lose. David could’ve been the worst shot ever with a slingshot and still come away the victor, just because of those five words he spoke to a seemingly scary giant, “The battle is the Lord’s” Thank you for reading my friends, and God bless.

Joel M. Bauer is a 45-year-old U.S. Army Veteran from Dunn, NC, which is just outside of Raleigh. After being honorably discharged from the U.S. Army, he attended school at Taylor University, a Christian liberal arts school, in Fort Wayne, IN, where he received his BS in social work and psychology. He has worked in such places as a homeless shelter, a community based treatment center for severe mental illnesses, a school for troubled students, and other social service agencies. His current endeavor is to build The Bottom Line website into a site that inspires both Christians and non-Christians alike, and brings glory to God.
Previous Fighting for Life and Liberty
Next Holy Spirit, I Need You