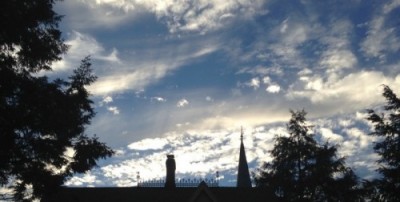 The end of church denominations?

Hackers breaking into international banks, terrorists taking over cities, abnormal weather patterns . . . a quick glance at our world brings a universal conclusion: it’s in a state of upheaval. And it isn’t just the earth that is in chaos; the heavens are manifesting strange occurrences, too.

Along with this shaking of the natural world, the church is being shaken as well. “Judgment begins with the house of God.” (1 Peter 4:17). Storms are coming and everything not build on the solid foundation of Jesus Christ is going to crumble, leaving a purified remnant of overcomers, ready for the reign of Christ (Eph. 5:27, Rev. 19:8).

One aspect of this shaking is the imminent end of church denominations. Paul said, “Now I exhort you, brethren, by the name of our Lord Jesus Christ, that you all agree and that there be no divisions among you, but that you be made complete in the same mind and in the same judgment. For I have been informed . . . that there are quarrels among you. Now I mean this, that each one of you is saying, “I am of Paul,” and “I of Apollos,” and “I of Cephas,” and “I of Christ.” Has Christ been divided? Paul was not crucified for you, was he? Or were you baptized in the name of Paul?” (1 Cor. 1:10-13 – NASB).

The Corinthian church was divided by their affiliations and preferences for different apostles. Paul underscored that these divisions in the Body of Christ should not exist. Paul might say today, “Martin Luther wasn’t crucified for you, was he? Or were you baptized into the name of John Wesley?” (I spent most of my church-going years in a denominational church and am by no means criticizing those who attend one, nor any specific denomination – just that the denominations themselves were never meant to be).

Cultural issues are already forcing denominations to splinter. Persecution will winnow the wheat from the chaff (Matt. 3:12). Things will heat up so much that Christians will have to band together, and as it becomes increasingly unpopular and even dangerous to bear the name of Christ, denominational and doctrinal differences will become secondary, until only the name of Christ defines us.

Jesus prayed for unity of the church in His high priestly prayer (John 17). In the same verse in which He asks for unity, He speaks of the coming glory of God (v. 22). Likewise, Haggai talks of the glory of the Lord returning immediately following all things being shaken (Haggai 2:7). It’s exciting to realize that the shaking we’re seeing is leading up to God’s glory returning to His church!

Emily Tomko's radical encounter with the Lord while at a nightclub changed her life forever and inspired her first novel, College Bound: A Pursuit of Freedom. She is the author of seven books, including 31 Thoughts on Prophecy and Leaving the Shallows: igniting the faith that overcomes the world. Her tastes tend toward vintage and she's a Germanophile, having spent a year in Bremen and Nuremberg. Emily loves the scriptures and writes with fierce compassion and a deep desire to see people freed from the miry clay of this world and walking in the truth.
Previous Want To Make 2015 The Best It Can Be?
Next 6 Ways Jesus Taught Men to be MEN