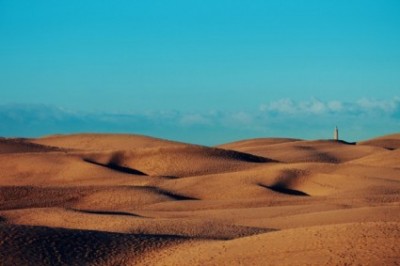 Finding Hope in The Desert

And the apostles, when they were returned, told him all that they had done. And he took them, and went aside privately into a desert place belonging to the city called Bethsaida. And the people, when they knew it, followed him: and he received them, and spake unto them of the kingdom of God, and healed them that had need of healing. And when the day began to wear away, then came the twelve, and said unto him, ‘Send the multitude away, that they may go into the towns and country round about, and lodge, and get victuals: for we are here in a desert place’ “. – Luke 9:10-12

According to the online dictionary, a desert is “a region so arid because of little rainfall that it supports only sparse and widely spaced vegetation or no vegetation at all.” Some common synonyms for the word “desert” are “wasteland” and “barren wilderness.” No wonder the disciples were concerned about feeding a multitude of over 5,000 people. They knew they didn’t have enough food with them, and where in the world were they going to find enough food in such a barren piece of land? In their minds, the only hope the people had of having a proper meal was to return to fertile ground, to go back to the towns and cities. Their logical assumption was that no food could be found in the desert.

We often assume the same thing when we walk through life’s deserts. No, not a desert like the Sahara, but a desert that is defined as “any place lacking in something.” We’ve all been there, right? A place without something. Maybe a place without good health or financial stability. Or perhaps you’ve been in a place without a job or a means of accomplishing your goals. Maybe you’re currently in a place without a mate or a hope for the future. Life is full of deserts, and many of us find ourselves walking through them more often than we would like.

The good news is that there is food in the desert. Despite the disciples objections, Jesus was able to feed the entire group of men, women and children that day with just a small lunch from a young boy. In that single act, Jesus sent out a reminder that He is the source of all things, and that He can provide our every need. Nothing is beyond Him. No task is too great. Not once has He looked at our problems and said, “Wow, that’s a tough one! I’m not sure I can handle that.” He is God, and God is both willing and able to provide whatever we may be lacking in our current desert.

“But I’ve been waiting so long for God to answer my prayer,” you say. “When will He give me the thing I long for?”

I can’t answer that. Only God understands His will and His timing. It could be that He has something better in store for you than that thing for which you’re asking. The important thing to remember is that God is not Santa Claus. His sole purpose is not to cater to our every desire. His goal is to make us more like Him, and sometimes that means denying us the things we want and instead giving us the things we need.

Maybe you’re walking through a desert today, and you’re growing more weary with every step. Hang in there! Jesus didn’t turn the people away, and He won’t turn you away either. He provided them with what they needed, and He’ll do the same for you.

What kind of desert are you walking through today?

Dana is a full-time Christian author and speaker residing in Greenville, SC with her husband and two dogs. In fulfilling her call to evangelize the lost and edify the saints, Dana spends her days writing devotions, devotional books and books for children, as well as recording podcasts on various Biblical topics. She serves in many capacities at her local church, including the roles of church pianist and ladies' Sunday School teacher. Dana has a passion for souls and longs to be used of God in whatever way He deems necessary. When not writing or serving at church, Dana can most likely be found reading or hiking a nearby trail.
Previous Christianity Isn’t Just for Women
Next Do You Struggle With Contentment?