Breaking News
Home / Faith / Changing “What if…” Into “So What!” Part I 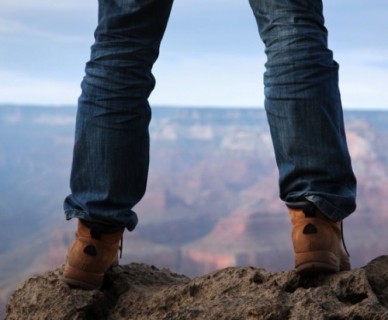 Standing roughly fifty feet off the ground I inched my way towards the home stretch. I had cleared the course without any hiccups and now the road was coming to a dead end. The only way off the down without having to rework the course backwards was the zip line. My ultimate fear of heights was coming to a head.

You may be questioning at this point as to what I was doing on a high ropes course to begin with if I was afraid of heights, but you see, high ropes is about climbing up and across. You don’t really need to look down except at your feet and in this case, my feet were now inching towards the exit for the course, the zip line landing.

I braced myself and began to clip in my rope locking the carabiner tight and secure. “Okay, Renee. You’re doing great. You are all locked in place and just need to jump on three. One…..two…..three”

In my mind I had jumped, but looking down, my feet were firmly planted on the landing. My co-worker had been alerted of my potential fear and was making his best attempt to encourage me to zip on down and enjoy the ride.

I took a second glance. Big mistake! Peering down my stomach began to churn like a cement mixer unsure of when the contents would spill out.

“I can’t.” Tears started building in the corners of my eyes. What if the rope breaks? What if the carabiner is not locked properly? What if I fall down and splat dead to the ground? What if….? What if…? What if…? The fear was starting to overcome my thoughts.

“Come on Renee. You can do this. There’s nothing to be afraid of. It’s not that far, and it goes really fast.” Doing his best to not become frustrated with me, my friend continued to try and ease my mind, but to no avail. I was frozen. Shaking with a fear that was gripped so tightly against my skin. I began to panic. I began to hyperventilate. I remained in this state for almost fifteen minutes trying to convince myself that “I can do this.” “It’s not that big of a deal.” “You are a grown woman!” “Everyone is watching.”

Twenty minutes into the ordeal, my coworker, who would later become my husband by the way, decided that the only way to get me off of my roost, without my knowledge, was to shove me off the edge. “Renee, the only way down is either by going back through the course, which I know you don’t want to do, or by the zip line. I have been down this hundreds of times. You will be fine. Are you ready?” Mustering myself up with as much courage as possible, I counted with him knowing that I was most likely going to remain in place., but he had other plans. “One….(our voices rang in unison Two….(My stomach lurched forward)Three…!!” The second that the word “three” came out of his mouth I felt his arm on my back shoving me towards the ground sending me down the zip line, and as fast as I realized what had happened, the joy ride was over leaving me with mixed emotions. Shock and anger:

“Hey!! Why did you shove me? You could have killed me. Elation and excitement: “Wow!!! That was a blast!! Can I go again?”

See, I share this story because that is how we seem to live life at times especially when God is tugging on our hearts to accomplish His will for us, but we are too afraid to respond. “What if they think I’m weird?” “What if I don’t know what I’m doing?” “What if I mess up?” “What if I’m not strong enough, or good enough, or smart enough?” “What if…?” “What if…?”“What if…?” I’m here to encourage you to stop being afraid of the “What ifs”.  They will always exist, but what would happen if we changed our attitude to become “So what…”   “So what if I’m not strong enough, good enough, or smart enough?” God is!

You see, I believe that there are so many opportunities in life that we are given, but we pass them by because of a four letter word: FEAR

God did not give us that idea. Instead, he has equipped us with the Holy Spirit, our multi-tool so to speak, who will help us accomplish the job.  If we turn away what God is asking us to do, the job will still get done. It just won’t be us who did it. Instead, he will ask somebody else.  Sometimes it takes a good friend who is willing to shove us in the right direction, just like my husband did,  to get us going on the ride of a lifetime.

Stay tuned in as I continue to share in Part II what happens when you move from “What if..?” to “So what..!”

is an author and editor for The Bottom Line Ministries as well as a member of Faith Writers. Currently she teaches high school language arts. She is a mom to four amazing blessings and enjoys every moment life has to offer. Renee has a fervor and drive to learn, she loves to read and spend time with her family, and is involved with her local church ministries. Humbled by God’s gift of words, she has a passion to write what the Holy Spirit has placed in her heart. She hopes to publish her in-progress book someday, but in the meantime, is honored to be placed as part of the TBL writing family and is holding on to the ride wherever God is leading. Renee and her family reside in their country home in Holland, Iowa.
Previous Lessons from a Shepherd
Next Spring Cleaning!