Breaking News
Home / Faith / Grace In The Midst of Sorrow 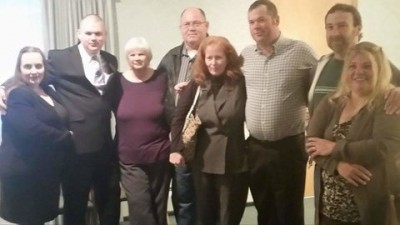 Grace In The Midst of Sorrow

“And when Jesus came to the ruler’s house and saw the flute players and the crowd making a commotion, He said, ‘Go away, for the girl is not dead but sleeping’.  And they laughed at Him.  But when the crowd had been put outside, He went in and took her by the hand, and the girl arose.”  Matthew 9:23-25 (ESV)

Jesus’ name is power.  And even when we are in the midst of sorrowful times, His name evokes that same power that we see in the scripture above.

My mother passed away a few days ago.  We knew it was fast approaching.  My family was feeling sorrow, simply because of the anticipation, knowing it would soon be a reality.

Mom had a form of dementia, which, while she forgot places, times, and things, she never did forget her family.  She knew me as soon as she saw me.  Until a few weeks ago, she was still talking, but when I saw her last week, she talked no more. But her eyes…her eyes were still expressive, still alive.

My husband, my step-father, and I were there with her at the very end.  Many had been by to see her the day before, friends, family, people from her church.  My family brought our new great-grandson, who brought a respite from our sadness — one of the many ‘Grace Drops’ that God provided that day.

I was desperate.  I needed peace, and I needed the understanding.  I needed to come to terms with what was happening to my mother.  I have been through this with other relatives.  And because I work in the medical field, there is a lot about the dying process that I can understand.  That doesn’t make it less painful.  That doesn’t bring peace.

But Jesus does.  There are two times of His grace that really stand out to me.  The first one is my mother’s eyes.  They had been closed nearly the entire time I was there.   Yet in the wee hours of the day she went Home, while sitting by her bed and holding her hand, I noticed her eyes were open, only slightly, but I could see them clearly.  So, even though I had been talking softly to her all along, I stopped for a moment.  I leaned over her and looked straight into those eyes.  It appeared she was looking back at me.  Thinking it might just be a reflex, I then moved to the side.  Her eyes followed me!  I was amazed.  I repeated this, and it continued to happen throughout the hours.  So I spoke to her and assured her she was okay, that we were there with her.  I checked off and on, and still she watched me.  I feel this was God’s way of bringing me peace, and if she was aware, peace to her as well.  It was this way until just before she took her last breath and relaxed into eternity.

The next ‘Grace Drop’ came the afternoon of that same day.  My step-father and I were going through Mom’s clothing to find the perfect outfit for her home-going celebration.  I heard my husband speaking with someone in the living room, and when he came into the bedroom, he carried a long box in his hands.  It was a delivery, via Fed Ex, of flowers I had sent to Mom, last year for Mother’s Day.  Yes, last year!  They had never arrived, and the company never responded to my requests for answers, or for a refund of the significant cost I had paid.  Yet, here they were, fresh, and pretty, wrapped in two bouquet’s.

While I stood there with my mouth open, my husband suggested this was a blessing from God, that He knew all along this day was coming, and that I would not even think to do flowers from us.  So when we took the clothing to the funeral home later that day, we took the flowers.  The funeral director used them during the family visitation that night, and they were prominently displayed in the church at the funeral.  They were blooming out beautifully by this time.  God’s grace.  Always present, always powerful.

If you have been in a situation when you needed and received God’s grace, please share this in a comment on this post.  And please go to www.mystoryofgrace.com and share there as well.  We want to celebrate God’s touch on your life!

(The picture that accompanies this post is one taken of my sons & daughter, daughters-in-law, my husband and I, taken at the family visitation time.  Grace!)

Lili lives in central North Carolina. She writes devotionals and Christian articles and has been published in e-magazines, newsletters, and articles. She is a member of Faithwriters.com. She and her husband Chuck love to travel, and are animal lovers as well. They are active in their local church. Lili credits God for any inspiration that allows her to write. It's all about Him!
@@ohiolili
Previous The Top Christian Leader In America
Next Home: A Movie With an Important Message