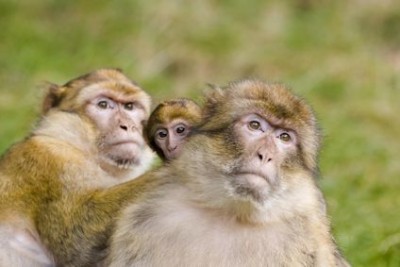 Have The Monkeys Lost The Evolution Debate?

The creation-evolution debate has always sparked a lot of interest and controversy. Public schools in America have taught evolution for decades, brainwashing our kids to believe that it is the “accepted” belief. People of faith hold to the creationist view. What do the American people as a whole believe about this issue?

A recent Lifeway Research survey disclosed some interesting and pleasantly surprising results. Of those polled, 72 percent agreed that since the universe has “organization” it was designed by a creator. “The fact that we exist means someone created us” is a statement affirmed by 79 percent of those surveyed. Clearly, evolution is not the majority view. What is surprising is that even 46 percent of people with no religious affiliation took sides with the creationists! Does this include some atheists? Though the survey did not specify if any of those with no religious connection were atheists, Graham Larson, reportedly one himself, and quoted in an article by Jack Minor of Prophecy Watch News, said that “…even people who claim to be committed atheists, tacitly hold religious beliefs, such as the existence of an immortal soul.” Hmm, I wonder where that leaves Mr. Bill Nye?

The results of this survey combined with the above quotation from an atheist sheds a new light on the creation-evolution debate, does it not? It also means that the public schools are way out in left field, totally out of touch with the general thinking of the population.

Not only do most people apparently believe that each individual was created by God, but the Bible says that each person was created for a purpose. Psalm 139:15-16 make it plain that we are no accident. “My frame was not hidden from you, when I was made in secret, and skillfully wrought in the depths of the earth. Your eyes have seen my unformed substance, and in your book they were all written. The days that were ordained for me when as yet there was not one of them.” The failure to accept this truth has resulted in 50 million abortions!

The overwhelming scientific evidence for creation supports the beliefs of 79 percent of those surveyed. Some people simply refuse to accept it. Their eyes have been blinded to the truth, and students in our public schools have been taught to the contrary. It is very encouraging, however, that this large percentage of the population still believes that God created us. If you are an evolutionist reading this, what are your reasons for rejecting creationism? If you are a creationist what argument would you present in defending it?

John Livingston Clark is 67 years of age and lives in central Washington State. He has written two published books, and two published poems. His initial book is called, " God's Healing Hope: Breaking the Strongholds of Wrong Thinking." His second book, released in December of 2016, is a motivational book written to seniors titled, " Seniors: Are You Retiring or Recharging?" Both books are available on amazon. You can also view his writings on www.faithwriters.com. John is available to speak on a variety of topics. Visit me at jclarkministries.com
Previous Our Hope: In God We Trust
Next I Know the Plans I Have for You