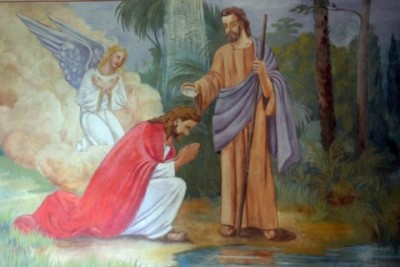 Instead of following his father’s footsteps as Temple priest, John the Baptist became a humble and bold man of God. Appearing as a child of promise and born to elderly parents with his mother long past conception. If you notice carefully the Old Testament prophet Isaiah foretold John’s coming 700 years earlier to the Jewish nation and described him as a mouthpiece for the Lord “The voice of one crying in the wilderness: Prepare the way of the Lord; Make straight in the desert a highway, for our God. The Glory of the Lord shall be revealed, for the mouth of the Lord has spoken” (Isaiah 4:3-5 NKJV).

Straightaway, he became a man of the desert, practicing self-denial and drawing spiritual strength as he communed with God in solitary places. Likened to Elijah, dressing in crude camel’s hair, he ate honey and wild locusts. Preaching a message of repentance, the foreordained prophet ushered in the Kingdom of God’s anointed Messiah.

“It is He who, coming after me, is preferred before me, whose sandal strap I am not worthy to loose.” These things were done in Bethabara beyond the Jordan, where John was baptizing. The next day John saw Jesus coming toward him, and said, “Behold! The Lamb of God who takes away the sin of the world!” (John 1:27-29 NKJV)

Truly, there’s a great deal to say about the ‘baptizer’ sent from God who had the honored privilege of being the forerunner of Jesus. John, himself, declared that he was not the message, only the messenger. Jesus, alone, is the Word (message)—sent from Father God to redeem mankind and restore that holy relationship lost in Eden.

Before the captors arrested and beheaded him, John urged his disciples to follow the Lamb “I indeed baptize you with water unto repentance. He will baptize you with the Holy Spirit and fire” (Matthew 3:11 NKJV). We might wonder why God gave John the Baptist such a brief life, yet, a colossal task. He’s mentioned ninety times in the New Testament but completely forgot himself and thought only of Jesus. More than anything else, it was this surrendered life of magnifying Jesus that entitled him to be called the greatest among them that are born of women (Luke 7:28).