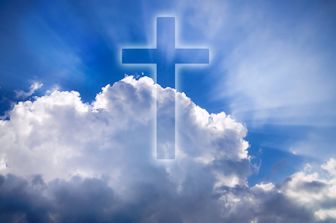 John 11:35 wins the prize for being the shortest verse in the Holy Bible. However, even though it is small, it still packs a punch when we look at what it accomplishes. So, because of this, I’m going to take a few moments to analyze this small, but Behemoth of a verse and what it means to us.

First, lets look at the scene. Everybody is weeping; not just Jesus. Lazarus has been in his tomb for four days, and the acknowledgement is made that Lazarus’ death could’ve been prevented if Jesus were present at the time of his passing. However, Jesus has bigger plans. He announced himself as “The Resurrection” and was about to raise Lazarus, who had been dead longer than the Son of God would lie in the tomb before he would be raised. This was a reflection of the power of “The Resurrection” who was and is Christ.

Another important thing to make note of is that God, in the form of Jesus Christ, was showing the ability to empathize with man. Everybody was weeping for Lazarus and Jesus wept with them. How precious the site must have been for Emmanuel to empathize with us even knowing that He was the Resurrection and was about to raise the man everybody loved and was teary eyed about.

The verse also shows the human side of Christ. It shows his love for His friend and His heart’s desire for him to be raised. He could’ve easily left Lazarus in his tomb, but knew that Lazarus’ awakening would serve an even greater purpose. It must have took great restraint to not have kept Lazarus from his initial death. However, Christ being the Resurrection knew all would turn out well.

Finally, Jesus weeping shows that we were created to be one with God. We experience many things as God experiences, such as love, joy, and weeping. This doesn’t make us gods, but it makes us creations within the likeness of God. Unfortunately, man introduced sin into the equation, which leads to problems. Just think, if there were no sin, Lazarus would have never died to begin with.

Friends, John 11:35 is a powerful scripture. “Jesus wept”, tells us so much about the care and love of our Savior. I’m sure Jesus even weeps for us today. Lets make those tears of joy instead of tears of sorrow. If you feel like Jesus is having to weep tears of sorrow over your salvation, then please check out the Romans Road to Salvation page on our website. Thank you for reading and God bless.

Joel M. Bauer is a 45-year-old U.S. Army Veteran from Dunn, NC, which is just outside of Raleigh. After being honorably discharged from the U.S. Army, he attended school at Taylor University, a Christian liberal arts school, in Fort Wayne, IN, where he received his BS in social work and psychology. He has worked in such places as a homeless shelter, a community based treatment center for severe mental illnesses, a school for troubled students, and other social service agencies. His current endeavor is to build The Bottom Line website into a site that inspires both Christians and non-Christians alike, and brings glory to God.
Previous Skip Church And Go Help Your Neighbor
Next The Superhero Cat: Tara