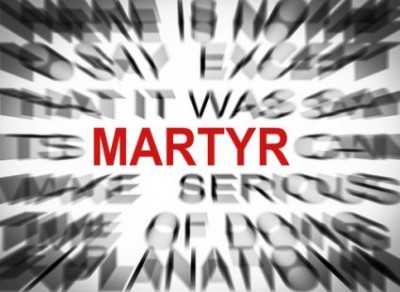 Martyrdom: To Die For Christ

On Sunday, April 19, 2015, ISIS released another video allegedly showing the murders of Ethiopian Christians in Libya.  The video shows one of these terrorists reading a statement, in which he states that Christians have the option to either convert to Islam or pay a tax set in the Quran.  If neither of these options is accepted, the Christian has automatically chosen death.

Libya has become a passageway to Europe for Ethiopian migrants who hope to enter European countries for work and improved lives.  An Ethiopian government spokesman, Redwan Hussein, has stated that migrants should understand that this is a warning to either find alternative routes for their journey, or reconsider other options.

This killing is one more example of the murder of people simply for their faith.  We have seen several videos and have read and heard of numerous accounts in the past year of Christians being murdered in large numbers because they believe in Jesus, and refuse to deny Him.  There is no reason to think that these horrendous actions will cease, as each time ISIS reaches its goal–to strike shock, disbelief and terror, in the hearts of otherwise peaceful people.

This execution of Christians, in truth, does not benefit those who commit it, in the long run.  Rather, they will make recompense at some point, whether in this life, or in eternity.  But we can be sure of one thing–they owe a debt, and it will be paid.

1:  the suffering of death on account of adherence to a cause and especially to one’s religious faith

2:  affliction, torture
It is the purpose of ISIS to eradicate Christianity from the face of the earth. They are radicalized, and their way is to force non-Muslims to embrace Islam.  Statistics show right now that Islam is the fastest growing religion in the world.  In a recent Pew Research Center article, it is predicted that if current trends continue, the number of Muslims will nearly equal the number of Christians globally by the year 2050.
Terrorists have a goal, it is to incite fear, inflict pain, and force their vision on those who disagree with them.  This is not new to the world, but the instances and the numbers are growing rapidly.
The Word of God addresses martyrdom in several Scriptural references.  Acts 6 and 7 tells us the story of Stephen, who was a devout follower of Christ.  He was accused of blasphemy by leaders of the synagogue, and a sentence of death by stoning was carried out.  He died well, asking the Lord to “not charge them with this sin,” just before he died.
The fate of Peter, the Rock, who Jesus charged with the building of His church, is not included in the Bible, but in other historical accounts.  He was crucified upside down, at his request, because he preached about Jesus.  He refused to be hung on the cross right-side up, as His Lord was, because he was not worthy.
These are only two examples of martyrdom for Christ.  There are many more, and there are many more to come.  But when believers become martyrs for Christ, they earn a very special place in heaven, and Jesus Himself will avenge their deaths.  Those who have a part in the death of a saint, simply because they will not deny Him, will receive justice from the hand of God.
“When He opened the fifth seal, I saw under the altar the souls of those who had been slain for the word of God and for the testimony which they held.  And they cried with a loud voice, saying, ‘How long, O Lord, holy and true, until You judge and avenge our blood on those who dwell on the earth?’  Then a white robe was given to each of them; and it was said to them that they should rest a little while longer, until both the number of their fellow servants and their brethren, who would be killed as they were, was completed.”  Revelation 6:9-11 (NKJV)
What do you think about the rapid increase of martyrdom for Christ in other parts of our world? Please share your thoughts and concerns with us in the comments section of this article.  We really do read your comments! And I promise you, I will answer your comment personally.
Blessings!

Lili lives in central North Carolina. She writes devotionals and Christian articles and has been published in e-magazines, newsletters, and articles. She is a member of Faithwriters.com. She and her husband Chuck love to travel, and are animal lovers as well. They are active in their local church. Lili credits God for any inspiration that allows her to write. It's all about Him!
@@ohiolili
Previous How to Transform and Renew Your Mind
Next A Dozen Don’ts to Avoid When at Church