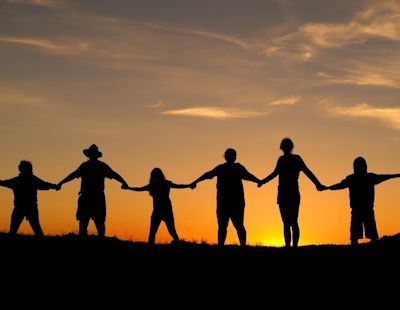 One Race Under God Is The Message Of The Gospel

I tuned into a broadcast showing an interracial church in Atlanta. Blacks and whites were joyfully singing together in a choir. Recently in Portland, Oregon, at a Ferguson rally, a white cop and a young black boy embraced in a bear hug.  These are two examples of what can happen when people focus on the positive and the grace of God is at work.

All races have several common denominators.  Each person has a right to life, liberty, and the pursuit of happiness, but each person also is, or should be, accountable for his or her actions. We all have the freedom to choose how we think and act. Each of us, black, brown, yellow, white, or red, is a part of the race called humanity. We have the freedom to choose to be prejudice or not to be prejudice, to practice forgiveness or to hold on to grudges and negative assumptions,  to think the best of others or to dwell on the wrong, and to focus on either color or character. The question is why do some people choose to dwell on being prejudiced. Why do they choose to hold on to their hurts, think poorly of others, or focus on the color of one’s skin? The answer is another commonality. It is called having a sin nature. Along with that God loves each and every one of us, even to the point of sending his son, Jesus, to die on a cross for our sins.

A recent article was written by Adelle Banks of Religion News Service entitled, “After Ferguson and Eric Garner decisions, White Christians Say it’s Time to Stand with Blacks.” That is still making it a race issue. I am a Christian. I will stand for justice, no matter the race. I will stand with all people except when they respond to violence with violence, like the black community did in Ferguson.  I am also going to stand for personal accountability whatever the color of skin a person may have.

To have one race under God means each person seeking justice apart from race. It means that each individual is accountable to God for his or her actions. It is recognizing that God loves each person, but that each individual, regardless of color, has a sin condition in need of grace and forgiveness. Evangelical leader, Russell Moore, sums it up this way: “There is nothing that is clearer in the New Testament than the fact that the Gospel breaks down the dividing wall that we have between one another.”  Galatians 3:28 says, “There is neither Jew nor Greek, there is neither slave nor free man, there is neither male nor female, for you are all one in Christ Jesus.” That explains how and why there can be blacks and whites singing in the same choir.

John Livingston Clark is 67 years of age and lives in central Washington State. He has written two published books, and two published poems. His initial book is called, " God's Healing Hope: Breaking the Strongholds of Wrong Thinking." His second book, released in December of 2016, is a motivational book written to seniors titled, " Seniors: Are You Retiring or Recharging?" Both books are available on amazon. You can also view his writings on www.faithwriters.com. John is available to speak on a variety of topics. Visit me at jclarkministries.com
Previous A Dot On The Wall
Next Not All Cartoons are Good