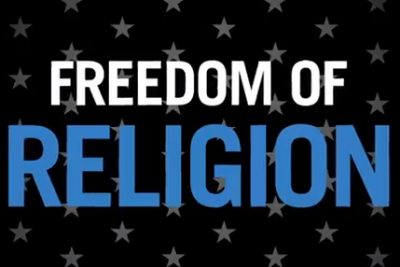 Although Christians in the United States are not facing persecution comparable to imprisonment and death like some in other countries, America is undergoing other types of persecution. Marine Lance Cpl. Monifa Sterling was court-martialed after she was convicted February 1, 2014, for refusing to remove the verse, “No weapon formed against you shall prosper,” (Isaiah 54:17), from her desktop computer.

Sterling was criminally prosecuted by the U.S. government for displaying a Scripture on her computer. Sterling’s staff sergeant did not like the Scripture passage on her computer and gave her an order to remove the passage. Sterling refused. The next day the Bible verse was thrown in the trash, and Sterling put the it back on her computer.

Legal proceedings have begun and they are in the appeals process.

Andrew Tilgham, staff writer for Military Times, conveyed that one of the key reason’s the appeal was previously denied is because the desk where she taped the Bible verse was used and visible to other Marines.

Tilgham also reported that the Navy Marine Corps Court of Appeals concluded in February that maintaining discipline and morale in the military work center could very well require that the work centers remain relatively free of divisive or contentious issues such as personal beliefs, religion, politics, etc.

Fox News’ Todd Starnes stated that Sterling represented herself during the trial, and she was found guilty of disrespect toward a superior commissioned officer and four specifications of disobeying the lawful order of a noncommissioned officer. Sterling was given a bad conduct discharge, and her rank was reduced from Lance Cpl. to private (E-1). The lower court and the appellate court ruled that displaying Bible verses at work is not protected under the Religious Freedom Restoration Act.

Starnes also revealed Liberty Institute Attorney, Hiram Sasser, said that this is a scary time when you are not allowed to have a small printed Bible verse in your own personal workspace because it might offend other Marines.

The court of Appeals for the Armed Forces has been asked to review Sterling’s case. Let us pray that this type of targeting and persecution of Christians will be stopped. The Liberty Institute, a non-profit group that advocates for freedom of religion, has now taken up Sterling’s case and has filed an appeal to the U.S. Court of Appeals for the Armed Forces. Sterling is also represented by former U.S. Solicitor General Paul Clement, a law professor at Georgetown University. Most recently, Clement won a Supreme Court victory on behalf of Hobby Lobby against the Affordable Care Act. This appeal centers on Sterling’s rights under the Religious Freedom Restoration Act, a 1993 law that clarifies the constitutional right to freedom of religion.

Just last week, Franklin Graham stood up for an Air Force general after the Military Religious Freedom Foundation called on Maj. General Craig Olsen to be court-martialed, this time for giving credit to God during a National Day of Prayer event.

What are your thoughts about these marines being court-martialed for their Christian faith?

*Information for this article was found on www.foxnews.com and www.militarytimes.com.

Stephanie has a heart and passion to see broken lives restored and redeemed through Jesus Christ. She writes through her personal experiences and her educational and professional background. She has over 17 years experience in counseling, and has a Master's degree in Social Work, Bachelor's degree in Psychology, and is a Licensed Belief Therapist. Stephanie has been married for 16 years,and has one grown son. Stephanie's desire through her writings is to bring hope and encouragement to the body of Christ, that no matter what you have been though or going through, there is restoration and redemption through Jesus Christ.
@Stephrreck
Previous When We Don’t Understand the Bible
Next Life Lesson From a Strawberry: Don’t Resist Discomfort