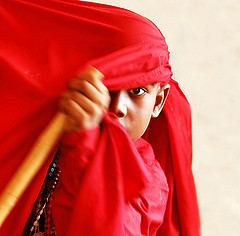 What the Old Testament conceals, the New reveals. Thus, Jesus is shrouded in the lives of Noah, Abraham, Isaac, Moses, David and Hosea, just to name a few. Determinedly, God created and called a people, the nation of Israel to live in covenant with Him—simply because He wanted to. He wove throughout all scripture the greatest love story ever told. Written in red: a Savior willing to trade His sinless life for our hell-deserving ones. Well, that’s a brief overview and apparently God thinks we’re worth dying for.

From the start, God sacrificed an animal’s skin to cover Adam and Eve’s disobedient sin. Thereafter, the whole creation contracted a spreading infestation starting with Adam’s firstborn son Cain murdering his brother Abel. Only a worthy spotless Lamb could reverse the curse and accordingly, God already factored that remedy in “Indeed we may say that in obedience to the Law everything is sprinkled with blood, and that apart from the outpouring of blood there is no remission of sins” (Hebrews 9:22 Weymouth Translation).

Another Christ-like character, Jacob and Rachel’s first son Joseph, met impossible odds. While wearing an ostentatious coat of many colors made by his father, Joseph’s brothers envied him. Their hatred turned into thoughts of homicide but sold him into slavery instead. Stripped of his elaborate, extravagant coat, dipped in goat’s blood and shown to their father Jacob, as if to say, ‘your beloved son is dead’. Overriding that event, God had in place a greater plan and used Joseph’s tragedy to save many lives including the Hebrew nation.

Quite understated but true, God’s ways, thoughts, wonders and performances are higher than our own, as seen in the life of Rahab the harlot. Before the siege upon Jericho led by Moses’ successor Joshua, the Israelite army spared everyone in the house marked by a scarlet cloth (Joshua 2:21, 6:22). Because Rahab hid God’s messengers whom Joshua sent to spy out the land, she, her relatives and whole household lived. Notably, Rahab became the great-great grandmother of King David and included in Jesus’ bloodline.

To wrap up today, let’s take a glance at what Isaiah prophesied 700 years before John the Revelator recorded it “Who is this who comes from Edom…with his clothing stained red? …It is I, the LORD, announcing your salvation! It is I, the LORD, who has the power to save!” (Isaiah 63:1 NLT) Revelation displays Jesus’ robe dipped in blood accumulated from the last battle of sin, Satan and death. Jesus’ second coming and triumphant victory ends all evil forever “The outer garment in which He is clad has been dipped in blood, and His name is THE WORD OF GOD” (Rev 19:13 Weymouth). The Lamb slain before created time made all things new. That’s it. Finished. Done. The Beginning and Ending of the greatest love story ever told, written in red (Revelation 21:6).