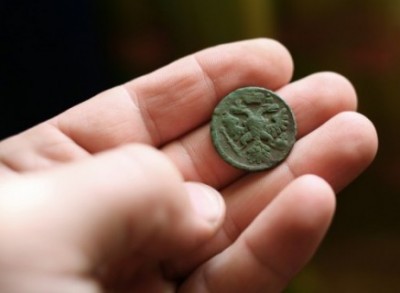 Two small coins sank into the offering box—gently released from the poor widow’s hands—copper mites, worth less than a penny. Casting away everything earned; she alone, knew the measure of her loving gift. Her act of faith manifested during Paschal Week that brought people from all over the region to Jerusalem. Traveling a great distance, numerous people journeyed to the Holy City with their required offerings for temple services.

Along the stoned walls of the holy court, stood receptacles for monetary gifts. Among the crowds, this anonymous woman went unnoticed as she approached the chest that would hold her precious offering. Perhaps she wondered, “Does God see me?” Being an Israelite, it’s possible she may have known the history of Abraham’s wife Hagar. And, how Hagar named Jehovah ‘a God who sees me’.

If you recall, Hagar became a surrogate mother when Sarah couldn’t bear children for Abraham. Several years after giving birth to Ishmael, Hagar and her son were cast out of the family. While in the desert, Hagar wondered if God saw her and her desperate condition. Indeed He did “Then she called the name of the LORD who spoke to her, You-Are-the-God-Who-Sees; for she said, “Have I also here seen Him who sees me?” (Genesis 16:13 NKJV)

Did God notice the poor widow in the temple that day? Yes. But, little did she know that the One sitting near the treasury was God manifest in human form. Because of His almighty omniscience, He knew all about her and the magnitude of her sacrificial worship. Just as God watched over Hagar and Ishmael in the wilderness, He observed this husbandless woman.

Definitely, an all-seeing eye took inventory of her meaningful gesture. Perhaps she wasn’t conscious of what omniscient eyes had seen but her obedience gladdened the sorrowful soul of Him who was on His way to give all He had on Calvary’s cross. Both the widow and Christ gave themselves sacrificially.

What’s more, the loving act of the poor widow outweighed the bounty of the rich Pharisees. In the Lord’s eyes she was truly rich; though outwardly, like Jesus, she was poor. The rich, though outwardly wealthy, were inwardly impoverished.

“Looking up, [Jesus] saw the rich people putting their gifts into the treasury. And He saw also a poor widow putting in two mites (copper coins), and He said, Truly I say to you, this poor widow has put in more than all of them; for they all gave out of their abundance (their surplus); but she has contributed out of her lack and her want, putting in all that she had on which to live.” (Luke 21:1-4 Amplified).