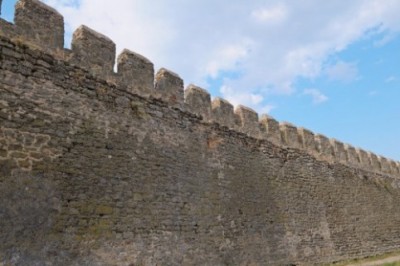 Silent Obedience and The Wall That Came Down

“Okay everybody, listen up.” Joshua stared into the eyes of his priests and army. “I have heard from God, and he has told me that this city will be ours, but we have to do exactly what he says.”

Armed and ready for a serious battle, the men anxiously awaited their orders trying to decipher which direction would be the best way to try and enter the kingdom.

“Alright, God says that the priests are to “Take up the ark of the covenant of the Lord and … carry trumpets in front of it.” And the army is to…“Advance! March around the city with an armed guard going ahead of the ark of the Lord. Those are your orders, now go!” Stealing a quick questioning glance at one another, the men took their posts advancing the ark of the Lord. As the marching began, they started to blow their trumpets, but Joshua had commanded the army, “Do not give a war cry, do not raise your voices, do not say a word until the day I tell you to shout. Then shout!” So he had the ark of the Lord carried around the city, circling it once. Then the army returned to camp and spent the night there.”

This strange and silent routine carried on for six days as Joshua and his men marched in silence until the momentous seventh day. “On the seventh day, they got up at daybreak and marched around the city seven times in the same manner, except that on that day they circled the city seven times. The seventh time around, when the priests sounded the trumpet blast, Joshua commanded the army, “Shout! For the Lord has given you the city!” Can you just hear the joyous cries of these men especially after not being able to say anything for six days!! As a woman, I don’t know if I could go that long without asking at least one question or saying hello.

Did you picture the mass number of soldiers at ready, armed for the battle, on fire to attack something, anything that stands in the way? Yet, God did not use their physical strength to break down the barriers that kept them outside the city limits. Instead, he pushed their mental endurance to the test by forcing them to listen, obey, and rely solely on God alone for the outcome, and what a beautiful fight it was. ”When the trumpets sounded, the army shouted, and at the sound of the trumpet, when the men gave a loud shout, the wall collapsed; so everyone charged straight in, and they took the city.” (Joshua 6:2-27)

Sometimes I believe that we want to make life more complicated than what it really is. Joshua for example had a promise from God that had been passed down to him. All he had to do was obey and trust that the promise would be fulfilled. Notice how the walls came down when Joshua chose to obey. Not with violence, but with silence. What walls do you still have up that God has offered to take down for you? Have you considered that maybe he wants to do the job for you? All you have to do is listen, trust, and obey?

is an author and editor for The Bottom Line Ministries as well as a member of Faith Writers. Currently she teaches high school language arts. She is a mom to four amazing blessings and enjoys every moment life has to offer. Renee has a fervor and drive to learn, she loves to read and spend time with her family, and is involved with her local church ministries. Humbled by God’s gift of words, she has a passion to write what the Holy Spirit has placed in her heart. She hopes to publish her in-progress book someday, but in the meantime, is honored to be placed as part of the TBL writing family and is holding on to the ride wherever God is leading. Renee and her family reside in their country home in Holland, Iowa.
Previous My Jesus Journey (Pt.5) – Say What?
Next God Gives Beauty for Ashes