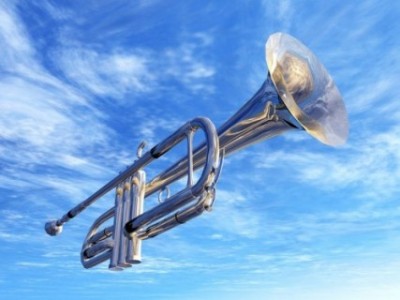 All over the world people have reported hearing noises coming out of the sky. Videos have been posted with sounds in the background. While it is easy to dub sound effects into a video, this has become very widespread. Quite frankly, it is hard to know if they are real or fake. What is real is what people have reportedly said about these eerie sounds.

One person said, “These noises have a groaning quality, overlaid with a metallic, vibrating sound similar to that of a musical instrument. In some instances, the sounds seem to include unintelligible voices.” Another person in British Columbia gave this account: “On the morning of August 29, 2013, at approximately 7:30 a.m., I was awaken by these sounds. I shot out of bed realizing it is the same sounds I had heard before.” Other people have reported the sounds to be like brass sections, or a trumpet.

All kinds of “explanations” are being given. Some are saying it is a   hoax while others are making a connection with the trumpets of Revelation. So, what does the Bible have to say about it? When one reads passages of scripture that mention trumpets like those in Revelation, Matthew 24:31, and I Corinthians 15:52, they are associated with dramatic events, none of which have happened on planet earth-at least, not yet.  Those are in the context of the Second Coming of Christ or events of the Great Tribulation. If these are valid accounts are they some kind of pre-warning of things to come?

It is very interesting that one of the above-mentioned quotes from someone who heard these noises uses the word, “groaning.” Romans 8:22-23 says, “For we know that the whole creation groans…and not only this, but also we ourselves…even we ourselves groan within ourselves, waiting eagerly for our adoption as sons, the redemption of our body.”

These sounds will have to remain a mystery. But if God is doing something to get people’s attention and making them think about the return of Christ and the judgment to befall the earth and mankind, that is a good thing. Maybe the trumpets are-“warming up.” Yes, strange things are happening, but God can and will do anything out of His love for mankind to give warning of impending judgment and to bring people into His grace and eternal redemption.

For those who have put their faith and trust in Christ, the Bible mentions another kind of mystery connected with trumpet sounds. I Corinthians 15:51-52 has this to say: “Behold, I tell you a mystery; we shall not all sleep, but we shall all be changed, in a moment, in the twinkling of an eye, at the last trumpet; for the trumpet will sound, and the dead will be raised imperishable, and we shall be changed.” (The word “sleep” in scripture often refers to physical death.)

Whether or not you hear trumpet noises in the sky is not as important as if you are responding to the voice of God for your eternal salvation. What do you think about the reported trumpet-like sounds? Are these noises and videos all just a hoax, or is God involved? What do you need to do to prepare for the “last trumpet”?

at the last trumpet Behold I tell you a mystery I Corinthians 15:51-52 Matthew 24:31 noises with a groaning quality responding to the voice of God for your eternal salvation Romans 8:22-23 the trumpet shall sound the whole creation groans trumpet sounds in the sky trumpet-like sounds trumpets of Revelation unintelligible voices we shall all be changed 2015-06-18
John Clark

Tags at the last trumpet Behold I tell you a mystery I Corinthians 15:51-52 Matthew 24:31 noises with a groaning quality responding to the voice of God for your eternal salvation Romans 8:22-23 the trumpet shall sound the whole creation groans trumpet sounds in the sky trumpet-like sounds trumpets of Revelation unintelligible voices we shall all be changed

John Livingston Clark is 67 years of age and lives in central Washington State. He has written two published books, and two published poems. His initial book is called, " God's Healing Hope: Breaking the Strongholds of Wrong Thinking." His second book, released in December of 2016, is a motivational book written to seniors titled, " Seniors: Are You Retiring or Recharging?" Both books are available on amazon. You can also view his writings on www.faithwriters.com. John is available to speak on a variety of topics. Visit me at jclarkministries.com
Previous Do Restraining Orders Protect Lives?
Next “The Least of These” and Me