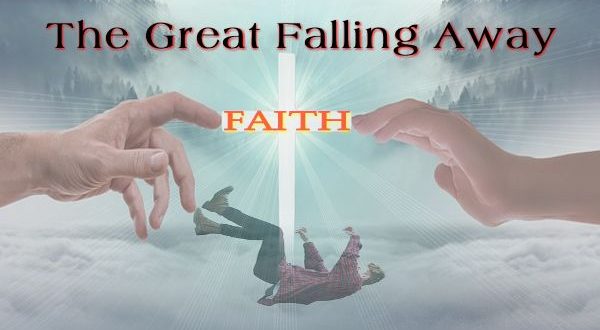 And God Has Done It!

Scripture warns us many times of the False Teachers/Preachers that will come in the latter days deceiving many (Matthew 24:11). Scripture tells they will perform many “signs and wonders to deceive” and that even God’s elect will be deceived by their lies: (Mark 13:22-23).

Christ’s Church has been warned repeatedly and clearly are told to be on close watch for them: “And what I say to you I say to all: Watch!” (Mark 13:37). Scripture does not give us these dire warnings concerning the coming of our Lord Jesus without also calming our fears, it says:   (2 Thessalonians 2:1-4). We are not to be “shaken” or “troubled” by all these coming events. It is all a part of God’s perfect plan and purpose to redeem His own. The “man of sin, the son of perdition” will not be revealed until this “Great Falling Away” of The Saints first happens.

The Great Falling Away of The Church must happen; It will happen; It is happening right now!

The “Fellowship of The Mystery” has been revealed in Christ Jesus (Ephesians 3). The manifold wisdom of God has been made known, and is continuing to be made known to the world, and to Heaven itself, through Christ’s Church! God’s eternal plan and purpose to reveal this mystery to the world about who He is, comes to us only one way…It comes through hearing and believing Christ’s Gospel as preached by Christ’s Church. It is done through the power that God has granted by grace through His Spirit. It is the “Wonder Working Power” of God working in us to do His will!

It is a gift given to us freely by God’s grace alone! It is received by the faith that God alone can give us to believe in His Son! It happens for the Glory of God alone! The knowledge of it comes to us through Jesus Christ alone, and by no other! It will come just as Scripture alone has told us it would, for there is no other Word of God through which He has made Himself known to us by!

This is what the Reformers fought so hard for. And the reason was…To re-establish the basic tenants of God’s Word in Christ’s Church!

Included in those tenants is the great doctrine of “The Perseverance of The Saints!”

Basically, this is God’s promise to us that His “Elect“, His chosen ones’, will persevere until the end. Some call it the doctrine of “Eternal Security” and many use the somewhat controversial quote “Once saved, always saved!” This is probably the most important aspect of Salvation, and yet the least understood. The reason I say this is very simple and is filled with common sense reasoning…If God’s Salvation was not permanent and secured by the presence of His eternal Spirit abiding in us, several other doctrines of God would be in doubt: Election, Predestination, Justification, Sanctification, and Glorification. That is a subject for a much longer study, but not here!

The very calling of God would be brought into question, and the work, and power of His Spirit to be enough to save us, and keep us saved!

The Westminster Confession of Faith, in 1649, settled this matter as a Church, it says: “They whom God has accepted in His beloved Son effectually called and sanctified by His Spirit can neither totally nor finally, fall away from a state of grace, but shall persevere to the end and be eternally saved.” This is well supported by scripture. The matter as Christ’s Church was settled, and it need not be re-litigated by The Saints ever again!

John 5:24 is enough for me, it says: “Truly, Truly I say to you, he who hears My word and believes in Him who sent Me has eternal life, and shall not come into judgment, but has passed from death to life.” But, if you still need another verse to give you eternal confidence, here it is: “My sheep hear My voice, and I know them, and they follow Me. And I give them eternal life, and they will never perish; neither will anyone snatch them out of My hand. My Father, who has given them to Me, is greater than all; and no one is able to snatch them out of His hand.” (John 10:27-29).

So, when God says we have no reason to fear all these things that must come about, we can surely trust in all of His promises!

Here are some questions the Reformers all asked and we should be asking ourselves as well: Is it free grace if it is man who decides if grace shall come to him? Is it Christ alone and Scripture alone, when all manner of worldly means are used to urge men to make a decision to receive God’s grace (psychology, sales tactics, and so many other different forms of manipulating the responses of men)? Is it for the Glory of God when we preach God does all He does out of His great love for man, or have we turned into the glory of man instead?

The “Fellowship of The Mystery” has been revealed through Christ Jesus, but the “Mystery of Lawlessness” has yet to be revealed!

We are warned though, that the worker of this “Lawlessness“, Satan, is already at work! Today’s Church largely denies that we are in the midst of this Great Falling Away, therefore it largely has paid no heed to the warnings. There is little doubt that the this Great Apostasy is taking place right now in Christ’s Church.

If this is true, and I really want everyone to grasp this! If this is so, then God has already started doing what He said He would do. This is central to my belief that today’s Church is falling away from the faithful teachings of the Early Church, and from the Reformers. What is it that God said He would do in response to this great wave of unbelief that would make much of Christ Church to fall away? How easy it is to forget what God has said through Paul in his second letter to the Thessalonians, he said: “Do you not remember that when I was still with you I told you these things.” (2 Thessalonians 2:5).

Satan is restrained from revealing himself by God through Christ (2 Thessalonians 2:6-10). It is not yet time for him to be revealed. There will come a time, at God’s own choosing, when the restraint will be taken out of the way. Then, this “Lawless One” will be allowed by God to show himself. He will come with much “power, signs, and lying wonders.” All that will perish in their sins unrepentant, will perish through his “unrighteous deception.” This great deception Satan is already at work on, and has been at work since the Garden when he first deceived man and sin entered the world.

And, that is why I proclaim…It is God that has done it!

We, as Christ’s Church, cannot let down our guard. We must maintain our watch on the wall of our Churches!

How are you being a “Watchman On The Wall”, and how can you and I do it better!

I am a layperson with 35 yrs. of teaching Sunday School, bible studies, and preaching on occasion. I teach a bible study in a local prison. I am a 36 yr. counselor/social worker. I am disabled and have devoted the past four years to studying, praying, and writing about my greatest love; this gospel of Jesus Christ that has the power to save a man's soul. I also write devotions for a Church in Marion, VA and I write for an orphanage/ministry in Zambia, Africa.
Previous No Spectacles Faith
Next Christian Author and USAF Veteran Releases Sci-Fi Series

“When the Son of Man comes in His glory, and all the holy angels with ...