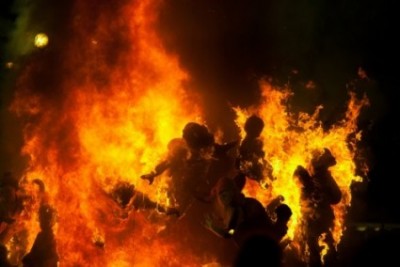 Lawlessness is on the rise...sign of the end times?

“The Increase of Lawlessness”

The recent rioting and burning in Baltimore might be considered a snapshot of a trend in America as a whole.

Baltimore Mayor Stephanie Rawlings-Blake supported the burgeoning violence in her city by telling police to give anarchists “space to destroy.” Later, when Rawlings was asked for accountability about her words, the public servant of an American city appeared to be ducking her head and slinking away from reporters. She is seen in this video  refusing to acknowledge questions, redolent of a criminal exiting a courtroom.

Lawlessness is not only increasing among the general population, but among those who are supposed to be governing the nation. That is, those in authority are themselves blurring and overstepping the boundaries of the law.  A most disturbing trend is that those elected to represent the American people, from local government all the way up to the executive branch, are themselves lawless. The foremost leader of the 2016 American presidential race has been investigated for scandal over a dozen times.

Corrupt leaders do not ensure an orderly, civic population.

Jesus warned that the world would see a surge in wickedness leading up to His return. “Because of the increase of lawlessness, the love of many will grow cold (Matthew 24:12). Likewise, 2 Thessalonians 2 speaks of a time of great lawlessness and apostasy (falling away from faith) leading up to the day of the Lord:

“For the mystery of lawlessness is already at work; only he who now restrains will do so until he is taken out of the way. Then that lawless one will be revealed whom the Lord will slay with the breath of His mouth and bring to an end by the appearance of His coming; that is, the one whose coming is in accord with the activity of Satan, with all power and signs and false wonders, and with all the deception of wickedness for those who perish, because they did not receive the love of the truth so as to be saved.”

In this passage Paul correlates lawlessness with a lack of love just as Jesus did: “they did not receive the love of the truth.”

How should we respond to the increase in lawlessness around us?

Pray for yourself. Jesus told believers very clearly they were to pray for themselves not to be led into temptation, but delivered from evil. (Matthew 6:13) Love of the truth keeps us from deception.

Pray for revival in the church. God’s will is that none should perish. When the church is filled with the Holy Spirit, the world at large is transformed. (Acts 2:41, Acts 4:4, Acts 2:47)

What hope do you see for a lawless nation other than sweeping revival? Will you set aside time daily to pray?

Emily Tomko's radical encounter with the Lord while at a nightclub changed her life forever and inspired her first novel, College Bound: A Pursuit of Freedom. She is the author of seven books, including 31 Thoughts on Prophecy and Leaving the Shallows: igniting the faith that overcomes the world. Her tastes tend toward vintage and she's a Germanophile, having spent a year in Bremen and Nuremberg. Emily loves the scriptures and writes with fierce compassion and a deep desire to see people freed from the miry clay of this world and walking in the truth.
Previous After the Pale Horse: The Rapture and The Tribulation
Next Be a Healing Balm