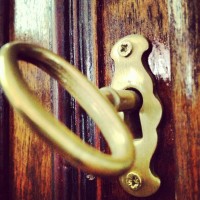 The Key To Unlock Joy and Peace

Peter therefore was kept in prison: but prayer was made without ceasing of the church unto God for him. And when Herod would have brought him forth, the same night Peter was sleeping between two soldiers, bound with two chains: and the keepers before the door kept the prison. And, behold, the angel of the Lord came upon him, and a light shined in the prison: and he smote Peter on the side, and raised him up, saying, Arise up quickly. And his chains fell off from his hands. – Acts 12:5-7

Do you ever feel like a prisoner? As Christians, we were once held captive by sin, but thanks to the grace of God, we are freed from that captivity. Does that mean we are no longer bound by anything? I don’t know about you, but I often feel like Peter, though my prison has no bars or chains. Rather, I’m held captive by a body that can’t seem to keep up with my life goals and ambitions. I’m imprisoned by my finances (or lack thereof). I’m enslaved by the restraints of time. Unlike Peter, however, I find little rest or peace in my jail cell.

When circumstances beyond our control bind us to a life we never expected, or a problem we’re unable to solve, freedom from our bonds (whatever they may be) seems to always be just out of reach. The prison doors have slammed shut, and we don’t have the key.

Is God able to deliver us as He did Peter? Not only is He able, He is willing, though we should keep in mind that deliverance may not come in the form we are hoping. God will open the prison gates, allowing us to walk boldly into a life of true freedom. According to Warren Wiersbe, “True freedom is doing whatever God wants us to do, because that is what is best for us. We find freedom in obedience, true joy in submission,” (excerpt from Meet Yourself in the Psalms).

Perhaps that’s why Peter could sleep so soundly in his prison cell. The bars and chains of the prison couldn’t deny his true freedom. He was being obedient to God, and in that obedience, he found both peace and joy.

What about you? Are you longing for the type of peace that will allow you to rest through the fiercest of storms? Do you struggle to find joy in your life? Could it be that the chains around your wrists are of your own making?

Freedom is waiting. You need only surrender your life to God. We often sing the old hymn, “I Surrender All,” but I wonder how many times we’re actually paying attention to the promise we’re making. Those words are the keys to our spiritual prison, but they must be said in earnest. Nothing short of absolute surrender will bring us true peace. Peter’s life was in God’s hand, and Peter could rest soundly in that knowledge. Can you?

Dana is a full-time Christian author and speaker residing in Greenville, SC with her husband and two dogs. In fulfilling her call to evangelize the lost and edify the saints, Dana spends her days writing devotions, devotional books and books for children, as well as recording podcasts on various Biblical topics. She serves in many capacities at her local church, including the roles of church pianist and ladies' Sunday School teacher. Dana has a passion for souls and longs to be used of God in whatever way He deems necessary. When not writing or serving at church, Dana can most likely be found reading or hiking a nearby trail.
Previous Toothbrushes Are Bringing People to Christ
Next For a Strong Marriage, Honor Your Spouse