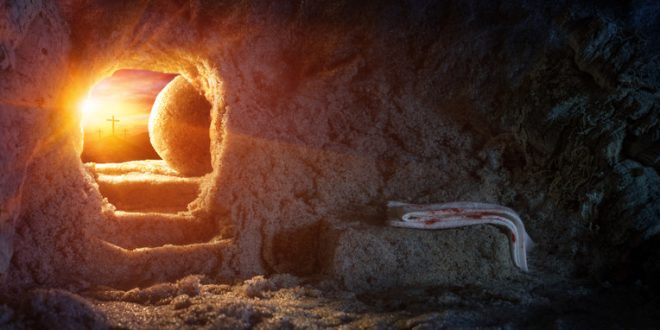 The Resurrection Is The Earmark of a Real Christian

What does the resurrection of Jesus Christ mean to you?  Did a person living on earth 2,000 years ago actually rise from the dead, bodily and physically? To many people it is just another story. For Christians it is the whole basis of our faith. History itself attests to an empty tomb. Scoffers have tried to explain it. No one, however, has ever given an explanation for the absence of the body of Christ, in the context of what really happened.

Consider the circumstances surrounding the resurrection as recorded in the four Gospels. Historical accounts also tell us something about it.  A huge bolder had been rolled downhill against the opening of the tomb.  It would have been physically impossible for anyone to roll it uphill.  A seal was placed upon the boulder. Anyone breaking it could pay the price of death. Dozens of Roman soldiers guarded the tomb. It was impossible for the body of Jesus to have been stolen. Furthermore, he was seen by hundreds of people who witnessed his glorified, supernatural body, after the resurrection.

God used supernatural means to move the boulder. It is recorded in Matthew 28:2, “And behold, a severe earthquake had occurred, for an angel of the Lord descended from heaven and came and rolled away the stone and sat upon it.”  When this happened, the tomb revealed that the body of Jesus was not there. He had already risen – right through the confines of his burial site. By doing this, Jesus, who three days earlier gave his life for the sin of humanity, proved that he was and is God.

Billy Graham, in his book, The Reason For My Hope, expresses it this way: “There is more evidence that Jesus rose from the dead than there is that Julius Caesar ever lived or that Alexander the Great died at the age of thirty–three. It is strange that historians will accept thousands of facts for which they can produce only shreds of evidence. But in the face of the overwhelming evidence of the resurrection of Jesus Christ, they cast a skeptical eye and hold intellectual doubts. The trouble with these people is that they do not want to believe…” John Singleton Copley, a great legal mind of nineteenth-century Britain, said, “I know pretty well what evidence is; and I tell you, such evidence as that for the Resurrection has never broken down.”

The resurrection is the earmark of true Christians. It is what separates the real ones from those who just think they are. Romans 10:9 sums it up. “If you confess with your mouth Jesus as Lord, and believe in your heart that God raised him from the dead, you shall be saved.”

Dear readers, if you have not yet acknowledged that Jesus Christ died for your sins, and rose from the dead for you, what is holding you back?

John Livingston Clark is 67 years of age and lives in central Washington State. He has written two published books, and two published poems. His initial book is called, " God's Healing Hope: Breaking the Strongholds of Wrong Thinking." His second book, released in December of 2016, is a motivational book written to seniors titled, " Seniors: Are You Retiring or Recharging?" Both books are available on amazon. You can also view his writings on www.faithwriters.com. John is available to speak on a variety of topics. Visit me at jclarkministries.com
Previous God’s Best…For All That Is Left
Next Fountain of Life