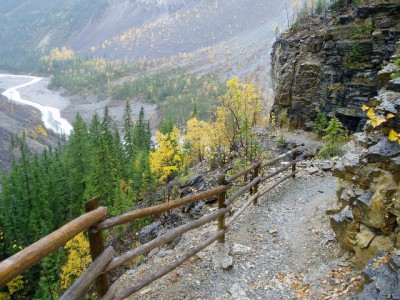 Trusting in the One Who Has Walked the Path Before Us

Hiking a new trail can be exciting, invigorating and even a little frightening. There is a thrill of covering unfamiliar territory yet also a fear of getting lost or, worse yet, not realizing and understanding the difficulty of the trail in question. But despite the possible setbacks, my husband and I decided to take our dog, Mitch, on a new hike (new to us, that is).

Before starting the journey, we did the responsible thing—lots of research. We found and studied maps of the trail. We surveyed the surrounding areas and brushed up on the specs of the hike, including the length and difficulty. We even found websites where people who had hiked the trail discussed their experiences. So, with maps and other various tidbits of information in hand, we headed out for our grand adventure.

Our choice of trails was one that sported two lovely waterfalls. Following the directions on the map, we easily found the first of the two falls. After that, things got a little tricky. According to the map, the second waterfall was only a couple of switchbacks away from the first, but I remembered having read a first-hand account of the hike that contradicted that notion. Fortunately, that information was one of the tidbits I had placed in the pack “just in case.”

I pulled out the papers and read through the description. Sure enough, according to this experienced hiker, the second waterfall was still another two miles away. My husband and I were perplexed by this contradiction of information. Which was it? We had no way of knowing except to keep following the trail.

Switchbacks came and went, and still no waterfall. Since the name of the falls was Secret Falls, we feared that perhaps we had missed it. Turn after turn, we debated whether to keep going or to turn back since the second waterfall was our predetermined turn-around spot. Thankfully, we stuck it out, and approximately two miles from the first waterfall, we spotted Secret Falls. It was gorgeous and well worth the hike.

As we traveled back toward the trailhead, I realized that having a map was great but not as nice as having directions from someone who had actually walked the path. The map gave us general guidelines, but the first-hand account directions gave us step-by-step insights on what to look for and how far we needed to go.

God has given us the Bible as a roadmap to life. It is full of guidelines to direct and lead us in how to live in a way that is pleasing to the Lord. It contains instructions on how to act, what to say and, yes, even what NOT to say. But let’s face it, sometimes we read those directions and think, “But can I really do this?” And for that reason, Jesus came to walk the path before us.

There is nothing in our lives that we can face that Jesus didn’t have to deal with during His time on earth. Heartache, grief, frustration—He felt it all. Yet, in spite of His circumstances, He walked the right path and left behind an example for each of us to follow. Not only do we have the map, but we also have the experience of the One Who has actually walked the path. He knows the way. He understands the setbacks. He warns us of the detours and distractions. And best of all, He even walks the path with us. Does it get any better than that?

Cause me to hear thy lovingkindness in the morning; for in thee do I trust: cause me to know the way wherein I should walk; for I lift up my soul unto thee. Psalm 143:8

Where do you feel the Lord is leading you today?  What new adventure has He planned for you?

Dana is a full-time Christian author and speaker residing in Greenville, SC with her husband and two dogs. In fulfilling her call to evangelize the lost and edify the saints, Dana spends her days writing devotions, devotional books and books for children, as well as recording podcasts on various Biblical topics. She serves in many capacities at her local church, including the roles of church pianist and ladies' Sunday School teacher. Dana has a passion for souls and longs to be used of God in whatever way He deems necessary. When not writing or serving at church, Dana can most likely be found reading or hiking a nearby trail.
Previous Cremation or Burial: Should Christians Care?
Next Tips for Reducing Stress During the Holidays