Breaking News
Home / Faith / We Must Pray For Franklin Graham 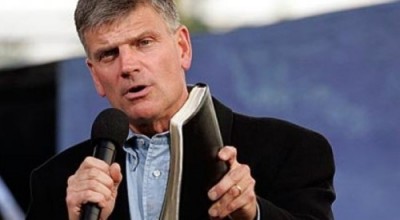 We Must Pray For Franklin Graham

We must pray for Franklin Graham, who is holding the banner high for spiritual truth and morality. He frequently speaks out on a variety of social and moral issues.

Recently, he was verbally attacked for commenting on the shooting and disrespect of police officers, and how it shows a lack of respect for authority. What is particularly troubling is that it came from some who are pastors and theologians who said Graham’s statement was “crude, insensitive, and paternalistic.”

They wrote a scathing letter, accusing him of sinning against the body of Christ. They should be praying for him instead of publicly demeaning him.  Franklin Graham is taking the lead in speaking out against the moral and spiritual decay that is bringing down this nation. This goes beyond senseless! It is a tragic indictment on how morally low America has become. These individuals actually believe that it is a sin to respect authority!

Franklin Graham is not one to respond to his critics in an ungodly manner. He has demonstrated much humility and grace. Matthew 5:11-12 comes to mind here. “Blessed are you when men cast insults at you, and persecute you, and say all kinds of evil against you falsely, on account of me. Rejoice, and be glad, for your reward in heaven is great…” Later in this same chapter it says to “love your enemies, and pray for those who persecute you.”

Praying is something that Franklin Graham will do. In 2016 he plans to travel to all 50 states to conduct prayer rallies. It is called the “Decision America Tour.” May God bless this great man of God!

What can you do to show support for people of God who are being spoken of falsely?

John Livingston Clark is 67 years of age and lives in central Washington State. He has written two published books, and two published poems. His initial book is called, " God's Healing Hope: Breaking the Strongholds of Wrong Thinking." His second book, released in December of 2016, is a motivational book written to seniors titled, " Seniors: Are You Retiring or Recharging?" Both books are available on amazon. You can also view his writings on www.faithwriters.com. John is available to speak on a variety of topics. Visit me at jclarkministries.com
Previous God’s Help, Times Three!
Next Caretakers of God’s Creation