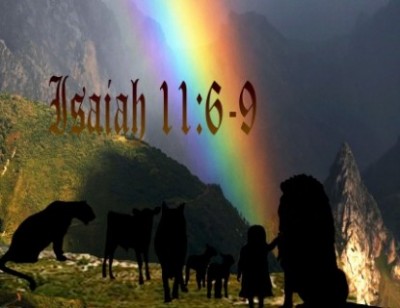 “In the beginning God created the earth and all its inhabitants, every green thing and every living creature. These were created so man had all he needed to survive and multiply on the earth. He then gave man dominion over the whole planet.” (Genesis 1:26)

All the creatures of the world ate from the trees and bushes that God created. (Genesis 1:30) God gave man one simple rule to follow, “ … of the tree of the knowledge of good and evil, thou shalt not eat of it.” (Genesis 2:17) All other trees in the garden were free to eat from–including the tree of life–which would give man immortality. (Genesis 3:22) Before Eve was even created, Adam was given the responsibility of naming all creatures in the earth. (Genesis 2:19-20) To this day we are naming new species and have at least maintained that aspect of our responsibilities.

When man defied God and partook of the tree of knowledge, he altered the world, and in his arrogance degraded creation to what we see today.

Humankind has done a fine job trying to alter the entire planet to suit our own needs. We have spread like a cancer, infecting and destroying more than we replace, forgetting our place in this world, and the responsibilities that God placed on us from the beginning.

Because of man’s sin, God had to kill other creatures to make clothing for Adam and Eve (Genesis 3:21); thus began the sacrifice of creatures for man’s benefit. The creatures that Adam named and was supposed to take care of had to be killed to meet their needs.  At least, for a little while, the animals and man remained in good standing with each other. (Genesis 9:2-3) But after the flood, many creatures were forced to become carnivorous (including man) and had to kill other creatures for survival. Part of the reason for this, where man is concerned, was that the ground no longer yielded to his needs, he had to till the soil and fight against thorn and thistle to scrape together enough food to survive.

Although man’s relationship with animals was altered considerably after this, God still left some hope. Not only will man one day be released from the curse brought on by the sins of our first mother and father, but the creatures and the planet itself are looking toward us for redemption as well.

“For the earnest expectation of the creature waiteth for the manifestation of the sons of God. For the creature was made subject to vanity, not willingly, but by reason of him who hath subjected the same in hope, because the creature itself also shall be delivered from the bondage of corruption into the glorious liberty of the children of God. For we know that the whole creation groaneth and travaileth in pain together until now. And not only they, but ourselves also, which have the firstfruits of the Spirit, even we ourselves groan within ourselves, waiting for the adoption, to wit, the redemption of our body.”

So it is not just the human race that will be released from the curse–all of creation will be released, and then we will have the millennium kingdom Isaiah describes in Isaiah 11:6-9:

“The wolf also shall dwell with the lamb, and the leopard shall lie down with the kid; and the calf and the young lion and the fatling together; and a little child shall lead them. And the cow and the bear shall feed; their young ones shall lie down together: and the lion shall eat straw like the ox. And the sucking child shall play on the hole of the asp, and the weaned child shall put his hand on the cockatrice’ den. They shall not hurt nor destroy in all my holy mountain: for the earth shall be full of the knowledge of the Lord, as the waters cover the sea.”

As an appointed caretaker of the world, how have you contributed to the wonderful creation God has created for us? Have you done your part to help preserve the natural world around you?

Tim is a self-published author. His genre is Christian Fantasy- he loves the challenge of trying to combine Christian and Fantasy into a novel that loses none of it's spiritual value. Tim has been an active member in every Church he has attended. He has served as Head Usher, a Sunday School Teacher, and a Youth Director, and has also served as a Church Elder. Tim's prayer is that the Holy Spirit will minister through his words, and that his experiences and knowledge will be helpful to someone out there who needs a true friend like what we have in Christ Jesus.
Previous We Must Pray For Franklin Graham
Next You’re in Covenant With The King