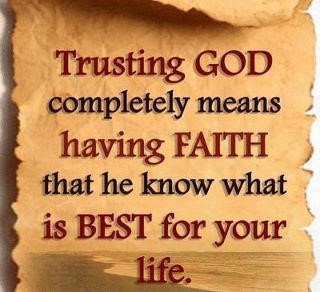 When God Asks You to Sacrifice Your Isaac

As told in Genesis 22:2, God commanded Abraham to, “Take your only son, Isaac, whom you love, and go to the region of Moriah. Sacrifice him there as a burnt offering.”

This was a most difficult command for Abraham, being that Isaac was a child of promise (Genesis 12:2-3; 15:4-5). Abraham responded to God’s request to sacrifice his son Isaac immediately. Isaac completely obeyed the Lord.

Perhaps God has asked you to sacrifice something very dear and precious to you by trusting Him completely with whatever he has asked you to lay down. Maybe you have a prodigal child like I do and God is asking you to,” Lay your child at the altar,” meaning surrender complete control to the Lord for their lives. God may be asking you to let go of a relationship, and to trust Him with that person.

Abraham’s faith was so great that he believed even if Isaac had to be sacrificed, God would keep His word and raise him from the dead (Hebrews 11:17-19).

What is that God is asking you to trust Him completely with? What does God want you to “lay down?”

God wants us to know we can trust Him with the people that are most precious to us, even our children.

God’s request of Abraham did seem unusually cruel and punishing. After all, Abraham did wait 25 years for the promise of having Isaac to be fulfilled. There is a chance that you may feel that what God is asking you to give up is cruel. I personally have grappled with what God has asked of me concerning my only son. I have always wanted to be a momma and have lots of children, however, I have one child and he is a prodigal. Recently, the Lord has asked me to,” Lay my son at the altar.” At first, I was panicked and thought, “I can’t, what if … ” You can fill in the what ifs.

My mind began to race to try and figure out what God was asking me to do. I now realize in those moments I was having trouble releasing my only son into God’s care. Then the Lord reminded me of Abraham and that He asked him to sacrifice his son of promise to the altar. Now of course, I do not believe God was asking me to literally sacrifice my son on the altar as he did with Abraham, but I believe God was asking me to let go of the many interventions I have so desperately tried to do to save my son. I believe God asked me to, “Let me have your son and do with him what I need to do.” To do something so unnatural takes absolute trust in the Lord. Having a trust in the Lord that says,” I don’t know what you are doing, but I will trust you anyways.”

God honored Abraham’s faith by offering him a ram to sacrifice instead of Isaac. God may have been testing Abraham’s faith and complete obedience. Oh, how I desire to be found faithful and obedient to the Lord like Abraham was.

So what did God do with Abraham’s son Isaac? He made him the father of the Hebrew people, and through his descendants God brought His own son to the world to die as a sacrifice for our sins.

If God has asked you to place something that you love at His altar, you can trust that God has a good plan. Though we may not understand everything that God asks of us, we can know that God is a good Father. He will never ask anything of you to hurt you.

What might the Lord be asking you to “sacrifice to His altar?”

Stephanie has a heart and passion to see broken lives restored and redeemed through Jesus Christ. She writes through her personal experiences and her educational and professional background. She has over 17 years experience in counseling, and has a Master's degree in Social Work, Bachelor's degree in Psychology, and is a Licensed Belief Therapist. Stephanie has been married for 16 years,and has one grown son. Stephanie's desire through her writings is to bring hope and encouragement to the body of Christ, that no matter what you have been though or going through, there is restoration and redemption through Jesus Christ.
@Stephrreck
Previous Ignite Your Passion for Soul Saving
Next God of Wonders