Breaking News
Home / Faith / Where Do You Rank on the Scale of Goodness? 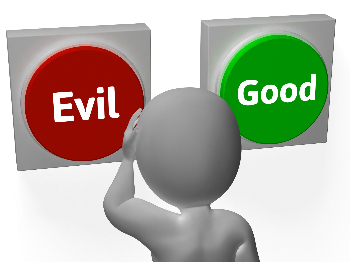 Where Do You Rank on the Scale of Goodness?

Please rank the following scenarios in their order of goodness: 1 being the least and 10 being the most.

Having a hard time deciding the order? It would seem natural that Mother Teresa may be considered number 10 and Hitler as 1, but what is the basis for your decision? Are you quantifying the goodness of their actions or possibly your reactions to the scenario?

Who decides to what degree an action is considered good?

The truth is that all situations could be considered “good” depending upon your perspective. What one may see as good, another may view the same action as not good enough. After all, Hitler truly believed that he was doing something “good” for mankind when he attempted to rid the world of what he deemed to be the weaker race. Sadly, others shared in his opinion.

When man creates his own ranking of goodness, the gavel of judgment is placed into corrupted hands.

The question, Who is worthy enough to go to heaven and who deserves to go to Hell?, no longer has a foundation for reckoning. Instead, there is mere chaos and confusion because “There is none righteous, no, not one; -Romans 3:10 who is able to make a fair judgment “for all have sinned and fall short of the glory of God,” –Romans 3:23

As much as we like to call ourselves “good”, the reality is we are all sinners. Our actions that break God’s heart are considered an abomination in the eyes of the Lord. –Proverbs 6:16

Until we confront the pride in our heart and humble ourselves before the thrown, we will continue to be deceived, believing that we are good, when the reality is, we are ugly because of the sin in our heart.

Think about those in your life who you may have unintentionally wronged or even intentionally hurt. What if they decided your eternal outcome?

Would you want your neighbor, brother, sister, parents, friends or even those you don’t know to determine where you fall onto their scale of goodness?

Thankfully it is God’s judgment of goodness that we will all face and not the ever changing human emotions or opinion.

To have the capacity to love and forgive someone no matter what they have done can only be completed by the only righteous judge; God alone.

Have you considered what the Judge of the universe will say about your life? If your heart is becoming stricken with fear or you are feeling a tightening in your body, then don’t you believe it is time to get right with God? He is knocking at the door of your heart. Will you open it and let him in past the threshold of your life?

Behold, I stand at the door and knock. If anyone hears My voice and opens the door, I will come in to him and dine with him, and he with Me. -Revelation 3:20

is an author and editor for The Bottom Line Ministries as well as a member of Faith Writers. Currently she teaches high school language arts. She is a mom to four amazing blessings and enjoys every moment life has to offer. Renee has a fervor and drive to learn, she loves to read and spend time with her family, and is involved with her local church ministries. Humbled by God’s gift of words, she has a passion to write what the Holy Spirit has placed in her heart. She hopes to publish her in-progress book someday, but in the meantime, is honored to be placed as part of the TBL writing family and is holding on to the ride wherever God is leading. Renee and her family reside in their country home in Holland, Iowa.
Previous Our Hope: Living Out Our Faith
Next Have a Berry Healthy Day