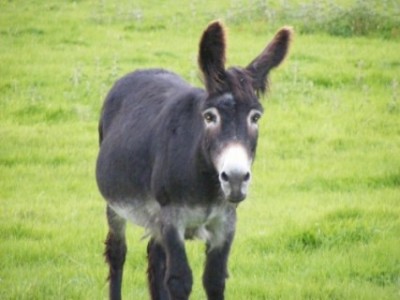 Yielded and Used By God

While in Mexico last April, I had the privilege of hearing the Sunday morning sermon at Rancho De Sus Ninos given by the Director of  La Mision School of Ministry.  There is just something extra special about listening to God speak in a new setting.  The usual distractions and expectations are gone, and most times it comes down to hearing with new ears.  The Holy Spirit was present to do wondrous things and made sure to let me know that He was there.  The topic of the sermon intrigued me…what do a donkey, a whale, a plant, and a worm all have in common?

Do you want to take a stab at guessing the point?  Do you give up?  (Spoiler alert…)  They yielded to the will of God.  Each one obeyed God and was then subsequently used by Him in each its own individual way.  Don’t confess to a lack of talent to be used by God.   Obviously any and all things can be used to bring His purposes to pass.  The only sad exception is the individual who chooses not to yield.

The director explained how the donkey obeyed by literally informing Balaam that danger stood directly in front of him.  The donkey was used as a messenger.  (Numbers 22:25-28)  The whale obeyed by choosing to open up for an oddly clothed creature instead of a sleek, shiny, tasty fish.  God used the whale to help bring focus to a headstrong servant. (Jonah 1:17)   The plant obeyed by growing up to its full height overnight.  God used it to ease Jonah’s grief. (Jonah 4:6)  The worm obeyed God by simply being its normal self and devouring the plant.  God used the worm to show Jonah that His pity on Nineveh was justified even more than Jonah’s grief over the dying plant. (Jonah 4:10-11)

At this point, our speaker made the comment that he had never read in God’s word that God repented because He had made a donkey, a whale, a plant, or a worm.  Each obeyed and yielded itself to His will.  Sadly, it is only humans that have moved God to say He was sorry for making them. (Genesis 6:6)  Our own stubborn wills and self-centered mindsets cause us to forget God’s goodness and mercy and take matters into our own hands.  We fall into the false belief that we are better than God at directing our lives.

If you have been resisting God, stop it.  Yield your will to His design and plan for you, personally.  Enjoy a life of blessing made possible by simple obedience.  Let His declaration, “Well done thou good and faithful servant,” be your goal. (Matthew 25: 21,23)  He will use you to make an impact for His heavenly kingdom.  There is nothing like the thrill of partnering with God.

I just love walking outdoors - day or night. I identify most with the creative side of God and am energized by His artistry all around this world. He amazes me every time I turn around! Yeah, God and thank you, Jesus.
Previous Titanic Faith
Next Between Two Dates:What Will Our Story Be?