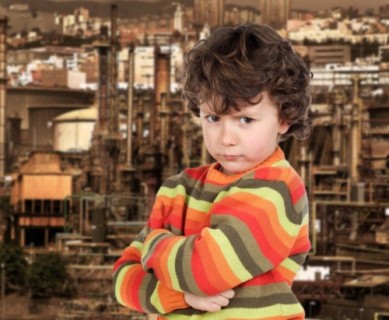 Adjusting an Attitude of Avoidance

“I don’t want to!” With his arms crossed and huffy face, my five-year old was encouraging his strong willed attitude early that morning all based on a simple request. “Son, please go change into your clothes for the day and then come and eat breakfast.”

“I don’t want to!” His grumpy response was not unusual for the am however, that morning, it was quite surprising and unpleasant to hear such a small voice throw back such a large attitude.

His steadfast demeanor drew my attention to a biblical story. That of Jonah and a place called “Not Nineveh.” (The Not Nineveh part I borrowed from Veggie Tales). You see there was a man named Jonah whom had been asked by God to accomplish a simple task. “‘Go to the great city of Nineveh and preach against it, because its wickedness has come up before me’ But Jonah ran away from the Lord and headed for Tarshish.” Using his free will choice, Jonah boarded a ship and decided that he would rather run in the complete opposite direction than to obediently follow God’s leading.

Boy, what a mistake that was! Not only did the ship encounter a terrible storm that instantly went away once Jonah jumped overboard, but he spent three days and three nights inside a great fish only to be vomited onto dry land to give the message that God originally had asked him to give. Sounds like avoidance to me.

Would you agree though that sometimes we can be like Jonah? Completely stubborn just because we can be so that someone else can join us in our miserable attitude. That’s what my son’s objective was for that morning. Since he was already having a bad day that had barely started, he wanted to bring everyone else down to the same level. Did it work? Not this time.

“Son, I am sorry that you don’t want to go and change, but that’s what you are being asked to do, and until your stinky attitude is changed, you are to stay in your room. No one else wants to be around you if all you want to do is complain. I love you, but your attitude stinks. Now, go change please.” Hoping that I would change my mind, he quickly turned around, crossed his arms in a stiff like motion and marched off into his room closing the door a little harder than usual.

Looking back on the parallel of Jonah, he too held the same attitude as my son when he recognized God’s grace and compassion.

“But Jonah was greatly displeased and became angry. ‘O Lord…That is why I was so quick to flee to Tarshish. I knew that you are a gracious and compassionate God, slow to anger and abounding in love, a God who relents from sending calamity.’ But the Lord replied. ‘Have you any right to be angry?’”

Jonah settled in east of town, made a shelter, and sat down to watch and wait to see what God was going to do to Nineveh. Jonah waited in great anticipation with almost a joyful eagerness to see what punishment God was going to dole out to Nineveh, but it never happened. They were shown mercy instead, and as he waited, God knew that Jonah would need a place of shade, so he provided a vine to grow up and around Jonah’s head and this made him happy, but when God sent a worm to chew and destroy the vine, this made Jonah angry. “‘It would be better for me to die than to live.’“ Wow! What an attitude. All because God gave and then took away. “But God said to Jonah, ‘Do you have a right to be angry about the vine?’ ‘I do,’ he said. ‘I am angry enough to die.’” Did I hear that right? Jonah is ready to die all because a worm ate a plant that was providing shade for him, but he didn’t even take care of the plant to begin with. It was a gift from God. Kind of like my son who only saw the command I had given him as a negative aspect in his life instead of a gift to help him start off his day.

I wish that I could say Jonah changed his attitude after God’s intervention, but he didn’t. At least that’s how the story is documented. I can say however, that a few minutes after retreating to his room, my son emerged, apologized for his stinky attitude, and changed the course of his day. Although some days we want to start off with our emotions and merge them into our attitude, we have to remember that God has many gifts for us each day. It’s up to us on how we receive and use them in our lives. Instead of running in the opposite direction, let us run the right way straight into his loving arms.

is an author and editor for The Bottom Line Ministries as well as a member of Faith Writers. Currently she teaches high school language arts. She is a mom to four amazing blessings and enjoys every moment life has to offer. Renee has a fervor and drive to learn, she loves to read and spend time with her family, and is involved with her local church ministries. Humbled by God’s gift of words, she has a passion to write what the Holy Spirit has placed in her heart. She hopes to publish her in-progress book someday, but in the meantime, is honored to be placed as part of the TBL writing family and is holding on to the ride wherever God is leading. Renee and her family reside in their country home in Holland, Iowa.
Previous The Deceit of Offense
Next Why I Love To Write