Breaking News
Home / Family / Good Sir! You are NOT a Caveman! 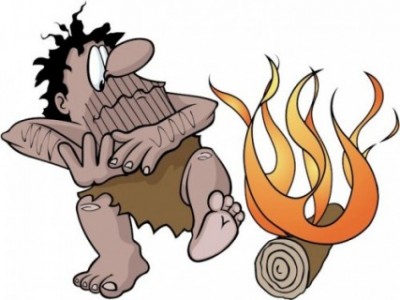 Good Sir! You are NOT a Caveman!

It is my sincere belief that society has tried to convince men that they are essentially evolved cavemen who should act “primitively.” Now I am all for having fun and joking around, but sometimes things go too far. When men are devalued they’re going to act out in such a manner. They’re going to take on the caveman mindset, so now you’re stuck dealing with someone who has little to no manners or believes that disrespect will earn them respect.

You Didn’t Evolve From A Lower Species

Guys, and women too, you didn’t evolve from a lower species. You’re not an ape and your distant ancestor is not a pile of goo. You were fearfully and wonderfully made by God the Creator in His own image and for His good pleasure (Gen 1:27, Psa 139:14, Phil 2:13). This is important to understand because you are a crown jewel. You are the pinnacle of God’s creation. You are kings and princes (Eph 2:6) and God has designed you with a wonderful plan in mind for your life (Jer 29:11).

God Made You Intelligent

When we take on a caveman mentality, we are insulting our intelligence. The truth is, we are innovative and creative thinkers who are continually advancing in technology. We didn’t have to ponder for millions of years on how to invent the wheel. God gave man knowledge and wisdom so that he could be not only build towns and cities, but also so that he could lead a household and take care of his family (Prov 22:6, Eph 5:25-33).

You Are Not Dinosaur Food

Friend, you are not, and never were, snack food for a T-Rex. God gave you dominion over nature and animals generally have a healthy fear of mankind (Gen 1:26). When dinosaurs and man co-existed together, it is likely that dinosaurs avoided man or they were used like cattle. The Holy Bible even speaks of at least two dinosaurs, which can be found in the book of Job (Job 40:15, Job 41:1)). When these dinosaurs are introduced, we see that they are completely in God’s hands and not savage creatures roaming the earth trying to eat you for brunch.

It is also my belief that dinosaurs were present on Noah’s Ark. You may be asking how is this possible? Well let me explain. Even the largest dinosaurs were born relatively small and it’s likely that younglings were the ones taken on to the ark. They would’ve been easy to manage, just like any of the other young animals.

Fire Comes From The Lord

Men, you were not confounded on how to manage fire. God created the giant fire in the heavens, known as the sun, and He certainly gifted man on how to use it (Gen 1:16). Furthermore, we know that fire comes from the Lord, because He is fire (Exo 3:2, 13:21, Mal 3:2). It is one of His many wonderful characteristics due to the purifying and refining qualities of it. God is willing to help you be pure and wants to continually refine the great work He has begun in you.

I can’t say this enough. Men, you are not made to club or harm women in any way. I don’t care if she didn’t make you the sandwich you demanded. You are to love and cherish her. Nobody deserves to be beaten and abused. However, there is so much abuse going on in families. Not only physical abuse, but mental and spiritual abuse as well. Guys, relationships aren’t always easy, but being a man of God means treating others with dignity and respect. This includes your mate.

Men, God loves you and created you to be gentlemen. He even came to this earth to show us how to do things right (John 14:6). Make sure you are reading and following the instruction book He gave to us, so that we can follow in his footsteps. You see, we are not called to be cavemen, but we are called to be disciples (Matt 28:18-20). So be strong but be gentle.

Just to add a bit of humor to this article, I’m going to share some of the funniest caveman videos I could find on YouTube. Some of them do contain a bit of violence, so please do not view if this will offend you. Thank you for reading and God bless.

Joel M. Bauer is a 45-year-old U.S. Army Veteran from Dunn, NC, which is just outside of Raleigh. After being honorably discharged from the U.S. Army, he attended school at Taylor University, a Christian liberal arts school, in Fort Wayne, IN, where he received his BS in social work and psychology. He has worked in such places as a homeless shelter, a community based treatment center for severe mental illnesses, a school for troubled students, and other social service agencies. His current endeavor is to build The Bottom Line website into a site that inspires both Christians and non-Christians alike, and brings glory to God.
Previous Suicide Hurts Everyone–How To Fight Back
Next Do Restraining Orders Protect Lives?