Breaking News
Home / Featured / A Hug To Warm Your Heart 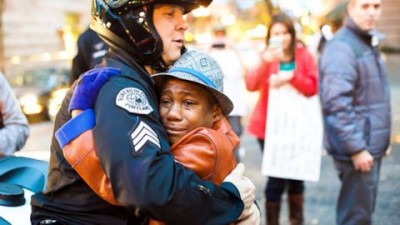 A Hug To Warm Your Heart

Something happened in Portland, Oregon, from which Ferguson can learn a lesson. Now that the trial is over there are those who have made it a point to continue violence and rioting. They have solved absolutely nothing by doing so. The world has become sickened by, not only putting race above justice, but also by the black communities response.

Portland police officer Sgt. Bret Barnum was one of many law enforcement  people on duty to maintain order at a Ferguson rally. Twelve-year-old Devonte Hart was also there with his mom, who is black, “with the intention of spreading love and kindness” by holding signs which read, “You Matter,” and “Free Hugs.” Little did these two know what kind of encounter they were about to have. It is one which would give an entirely new “color” to the Ferguson incident.

When the officer saw the sign about free hugs he asked, “Do I get one of those?” He motioned to the young boy to approach his motorcycle because he didn’t want to “miss an opportunity to impact this child.” It was a stellar moment that has gone viral as the white officer and  young black kid embraced in a bear hug.

Ferguson needs to take note. This encounter is part of the solution. There will never be healing in their community or among races as long as people react by violence, or hold on to fear and assumptions about the other race. The city witnessed a tragic event which happened to involve a white cop and a young black man. It does not mean that all white people are prejudice toward blacks, but I have sensed that this is the mindset of some in Ferguson.

This picture of a white cop who initiated the hug with the black child proves that healing can take place. Just two people in Portland were determined to drop the fear and assumptions. It is what is in a person’s heart that makes the difference, just like Martin Luther King said: Put the emphasis on one’s character, not the color of their skin. New Orleans Saints player, Benjamin Watson, spoke out by saying, “Sin, not skin, is the problem.” When people realize they have a sin problem and ask God to give them a new heart and character, they will begin to see one another as God does.  A song sung long ago in church school goes like this: “Jesus loves the little children, all the children of the world. Red and yellow, black and white, they are precious in his sight. Jesus loves the little children of the world.”

Thank you Sgt. Barnum and Devonte, for warming our hearts. May there continue to be more hugs between blacks and whites that come from one’s character and are blind to color.

John Livingston Clark is 67 years of age and lives in central Washington State. He has written two published books, and two published poems. His initial book is called, " God's Healing Hope: Breaking the Strongholds of Wrong Thinking." His second book, released in December of 2016, is a motivational book written to seniors titled, " Seniors: Are You Retiring or Recharging?" Both books are available on amazon. You can also view his writings on www.faithwriters.com. John is available to speak on a variety of topics. Visit me at jclarkministries.com
Previous Hello…Do You Hear Me?
Next Where’s The Common Ground?