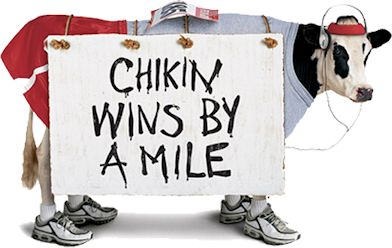 On January 28, 2014, Birmingham, Alabama was hit by a rare snow storm. The city was not prepared. Drivers were stranded in their cars for up to seven hours, with no food or water. Freeways were like a parking lot.

Mark Meadows, owner of a Chick-fil-A restaurant, let his employees leave early. When they came back to his business, unable to get home, Mark went into action. He had food and employees. They cooked several hundred sandwiches consisting of hot juicy chicken breasts between two buttered buns, then stood on both sides of highway 280 and passed them out to stranded, tired, and weary motorists. The employees refused to take a single penny for their effort.

The restaurant also served as a temporary “bed and breakfast” for people to spend the night and have chicken biscuits in the morning.  Audrey Pitt, the manager, said, “…We were here. We had food and there were people outside who needed food. So it just made sense to do something for them.”

Chick-fil-A was in the news a lot last year because of their support for traditional marriage, and was the target of many people in the gay community.  It is a business founded by a Christian family and based on biblical values of helping and caring for people above profit.  Mark Meadows and his employees saw this as an opportunity to openly demonstrate those values. They fulfilled what it says in Matthew 25:35. “For I was hungry, and you gave Me something to eat; I was thirsty, and you gave Me drink; I was a stranger, and you invited Me in.”

I John 3:17-18 also applies here. “But whoever has the world’s goods, and beholds his brother in need and closes his heart against him, how does the love of God abide in him?”

Chick-fil-A did not close their hearts that day in January. They opened their hands to the people stranded in cars. All Christians would do well to follow their example of recognizing opportunities to give of one’s resources when the need arises, expecting nothing in return.

God’s love truly was demonstrated in the middle of a snow storm in Birmingham, Alabama.

John Livingston Clark is 67 years of age and lives in central Washington State. He has written two published books, and two published poems. His initial book is called, " God's Healing Hope: Breaking the Strongholds of Wrong Thinking." His second book, released in December of 2016, is a motivational book written to seniors titled, " Seniors: Are You Retiring or Recharging?" Both books are available on amazon. You can also view his writings on www.faithwriters.com. John is available to speak on a variety of topics. Visit me at jclarkministries.com
Previous Let not your Heart be troubled
Next You Otter Know Better