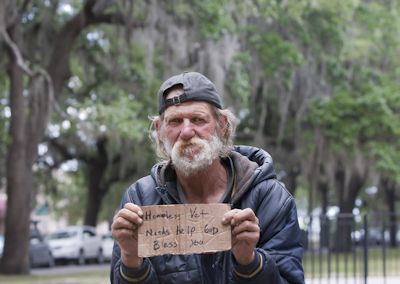 What would it take to put an end to people living on the streets and under freeway bridges? We see them living in cardboard boxes, tents, or right out in the open. The problem of homelessness is an eyesore and blight on the world’s culture, particularly in America, the most blessed nation on earth. Public money is not being  earmarked to end this condition.

Along with money from private groups and individuals it will take compassion and creativity. Members of the Phi Kappa Psi fraternity at the University of Alabama at Huntsville, have come up with an innovative temporary solution that has some potential. After sitting down and sharing a meal with some homeless veterans not too far from campus, a vision was born in the mind of two college men.

Their idea is to create a “tiny home community” of 300 square foot structures, containing a central hub with a kitchen and bathrooms, along with sharing in the preparation of meals. The small buildings, costing $5000 apiece, would be big enough only for a bed and a few necessities, but in the words of one of the students, “something’s got to be done.” They would at least provide a comfortable place to sleep with a roof over their heads, and according to the article I researched, 30 of these “living quarters” would fit on one acre of land. There is something terribly wrong with this picture, isn’t there. These are people who have served our country and have defended our freedom but do not have a place to live!

This concept, proposed by two college students, is taking hold in four states, so far. Of course, it would not have to be limited to just veterans. With money, resources, and resolve, it seems like a viable temporary solution to enable these people to transition back into normal life. As usual, there are some government agencies coming up with excuses and regulations, like electrical and sewage concerns, instead of ways to make it happen. After all, these are not houses; they are really nothing more than a bed with a safe shelter.  Isn’t it interesting how people complain about the homeless problem, but when someone proposes a solution, albeit small and temporary, they want to throw cold water on a heartwarming idea. I John 3:17 says,”But whoever has the world’s goods, and beholds his brother in need and closes his heart against him, how does the love of God abide in him?” Too often, making excuses reflects a lack of compassion.

What are your thoughts on this innovative idea? Matthew 17:20 tells us that with the faith of a grain of a mustard seed, mountains can be moved. How do you think this “mountain” could be moved?

John Livingston Clark is 67 years of age and lives in central Washington State. He has written two published books, and two published poems. His initial book is called, " God's Healing Hope: Breaking the Strongholds of Wrong Thinking." His second book, released in December of 2016, is a motivational book written to seniors titled, " Seniors: Are You Retiring or Recharging?" Both books are available on amazon. You can also view his writings on www.faithwriters.com. John is available to speak on a variety of topics. Visit me at jclarkministries.com
Previous Is dating compatible with scripture?
Next Skating Everywhere…Even In Church