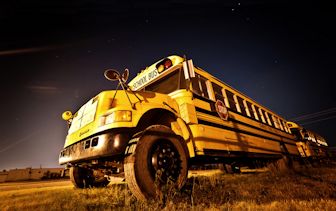 In the coal country of eastern Pennsylvania is the town of Ashland, the population of which is only 2,800 people. In this small community is a big yellow school bus, but it is not being used to transport students. Within the town of Shamokin, not too far away, is a group of eight Christians meeting in a home, led by pastor James Bower. So, what does the small group in Shamokin have to do with the yellow school bus in Ashland?

A vision was born in the mind and heart of Janet, the pastor’s wife. In the county in which the couple reside 50 percent of the people live at or below the poverty level. The mission was to help provide food for the people in the surrounding areas, especially the children. In 2011 they “put a pot of soup in the back of a Chevy Malibu and started serving right on the streets…” They did this for two years! Then, a yellow school bus was donated for the couple to expand their work and the ministry called, “God’s Chuck Wagon” was born. It provides a free meal of soup, and a hot dog or sandwich, along with dessert to those who are hungry. The bus has been completely renovated into a mobile food pantry. Not only can people walk up to the bus and receive free food, but it is self-contained and equipped with the personnel and loaded with donated food, ready to roll in the event of a natural disaster.

The ministry has been feeding people in six communities. Eight people have been providing meals for 400 people a week. Pastor Bowers said, “Our future is in ten years to be throughout Pennsylvania with a fleet of buses.” The remarkable thing about this ministry is that it was a vision of a person that came into reality because of the effort of a small group of eight Christians meeting in a home. They decided to do what they could, where they were, with what they had, ho matter how small. This reminds me of the story in Matthew 14:17-21 where Jesus miraculously fed over 5,000 people by multiplying the five loaves of bread and two fish provided by a young lad. There is another article posted on this website that asks the question, “Looking For Your Purpose?” Janet and James Bowers found their purpose. Have you found yours? Offer to God what you can, where you are, with what you have. Then, watch what God does with it.

John Livingston Clark is 67 years of age and lives in central Washington State. He has written two published books, and two published poems. His initial book is called, " God's Healing Hope: Breaking the Strongholds of Wrong Thinking." His second book, released in December of 2016, is a motivational book written to seniors titled, " Seniors: Are You Retiring or Recharging?" Both books are available on amazon. You can also view his writings on www.faithwriters.com. John is available to speak on a variety of topics. Visit me at jclarkministries.com
Previous What is Marriage, Really?
Next Putting Your Foot in the Water