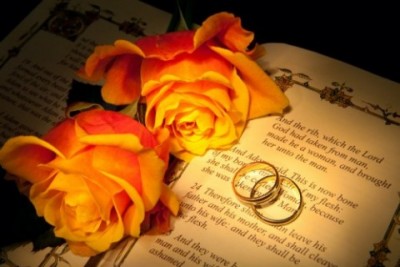 What is Marriage, Really?

Genesis 2:23-25 (NIV) –  The man said, “This is now bone of my bones and flesh of my flesh; she shall be called ‘woman,’ for she was taken out of man.” That is why a man leaves his father and mother and is united to his wife, and they become one flesh.  Adam and his wife were both naked, and they felt no shame.

I read once that, in today’s culture, we tend to think of marriage in terms of the actual man-made ceremony. Whether its an extravagant and expensively celebrated gala, or a small quiet three person get-together, the actual event remains relatively similar. The guy stands next to the girl in the presence of a minister or judge. Certain bullet-point vows are recited. Half hearted promises are made. Smiles and pictures follow. And shortly afterward, the whole ceremony is Tweeted and Facebooked. Unfortunately, a staggering number of those unions dissolve 5 to 15 years later. Somewhere along the course of humanity, we managed to defile and dilute the significance and importance of God’s idea of marriage.

Adam and Eve were God’s first couple: the standard. They were literally one flesh. That, my friends, is what marriage is supposed to be about. One man united with one woman, under God, to become one flesh. Eve’s job was to be a companion to her husband, and Adam was charged with taking care of his companion. Together, they were to multiply and be fruitful.

In today’s society, the culture teaches people to do whatever they feel like doing. Marriage doesn’t have to be restricted to the man caring for his wife. Heck, he can sit around all day playing video games while she works a 12-hour shift and still come home to cook for him. Man doesn’t need to be fruitful to multiply. He can multiply with any woman he wants, and simply leave the seeds to raise themselves. Man, doesn’t have to restrict himself to one woman, for the rest of his days. Divorce attorneys are eager to get him out of that union, for a small fee. He can have any woman he chooses. Man doesn’t even need to be a part of the marriage union anymore. These days, women are cohabitating with adopted children, the same as men. Alternative lifestyles are all the rage!

There are those of us who follow God’s word and live by His standard of what real marriage means. When I united with my wife, under God, I had no idea what that truly meant. But, as I came to know God, He defined the terms clearly. She is my companion for life. I will respect and care for her until I die. I will never leave her side. And together, we raise our children to someday follow the same standard because we honor our God. Society cannot redefine what the Lord has already put into place, in our lives. Adam and Eve live on, in our marriage.