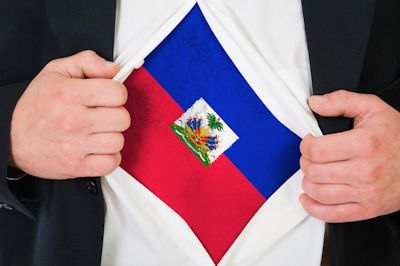 Haiti is one of the poorest nations on earth and has over 300,000 “orphans and street children.” In addition to this the nation was ravaged by a severe 7.0 earthquake on January 12, 2010. Through all of this, however, some real heroes have emerged as a result of relief organizations.

One organization helping in Haiti to meet the needs of orphans is H.E.R.O., which stands for “Housing, Education, and Rehabilitation of Orphans.” It is directed by Dr. Steven Kirby and Michele Deardorff. Michele’s family is from my local church and community in Zillah, Washington. She moved to Haiti in 2009 to teach 3rd grade in Port-au-Prince. It was there she was exposed to poverty at its worst. In my mind Michele is a hero, having moved from the comforts of living in a small town in America to the extreme poverty of Haiti.

Michele, however, would credit the real heroes as the orphans who have been educated and rehabilitated into responsible and mature adults. One such person is a boy named Robenson. He used to live in a tent flooded by a storm, malnourished and not attending school, not to mention that Haiti is a country where the high school graduation rate is only 6 percent.  He now lives in the H.E.R.O. house. Recently, he won second place in the Haiti National Chess Tournament, and second place in his age category in tennis. It doesn’t stop there. Robenson passed the 6th grade National Exam, required to pursue additional education.

The true heroes of our time are not those who gain fame and fortune. They are not the sports figures, movie stars, or musicians who receive accolades from mass audiences. True heroes are those who have been born into severe poverty or are victims of tragic circumstances but have risen above their past to achieve dreams they never thought possible. They are the people who are not living in their past but are “…reaching forward to what lies ahead…” (Philippians 3:13)

You can read more stories about Haiti heroes by going to www.haitihero.org. You can also sponsor an orphan for only $35 per month and help a life have a new beginning.

John Livingston Clark is 67 years of age and lives in central Washington State. He has written two published books, and two published poems. His initial book is called, " God's Healing Hope: Breaking the Strongholds of Wrong Thinking." His second book, released in December of 2016, is a motivational book written to seniors titled, " Seniors: Are You Retiring or Recharging?" Both books are available on amazon. You can also view his writings on www.faithwriters.com. John is available to speak on a variety of topics. Visit me at jclarkministries.com
Previous A Simple Solution To Getting Out of Debt
Next The Old and The New: Better Together